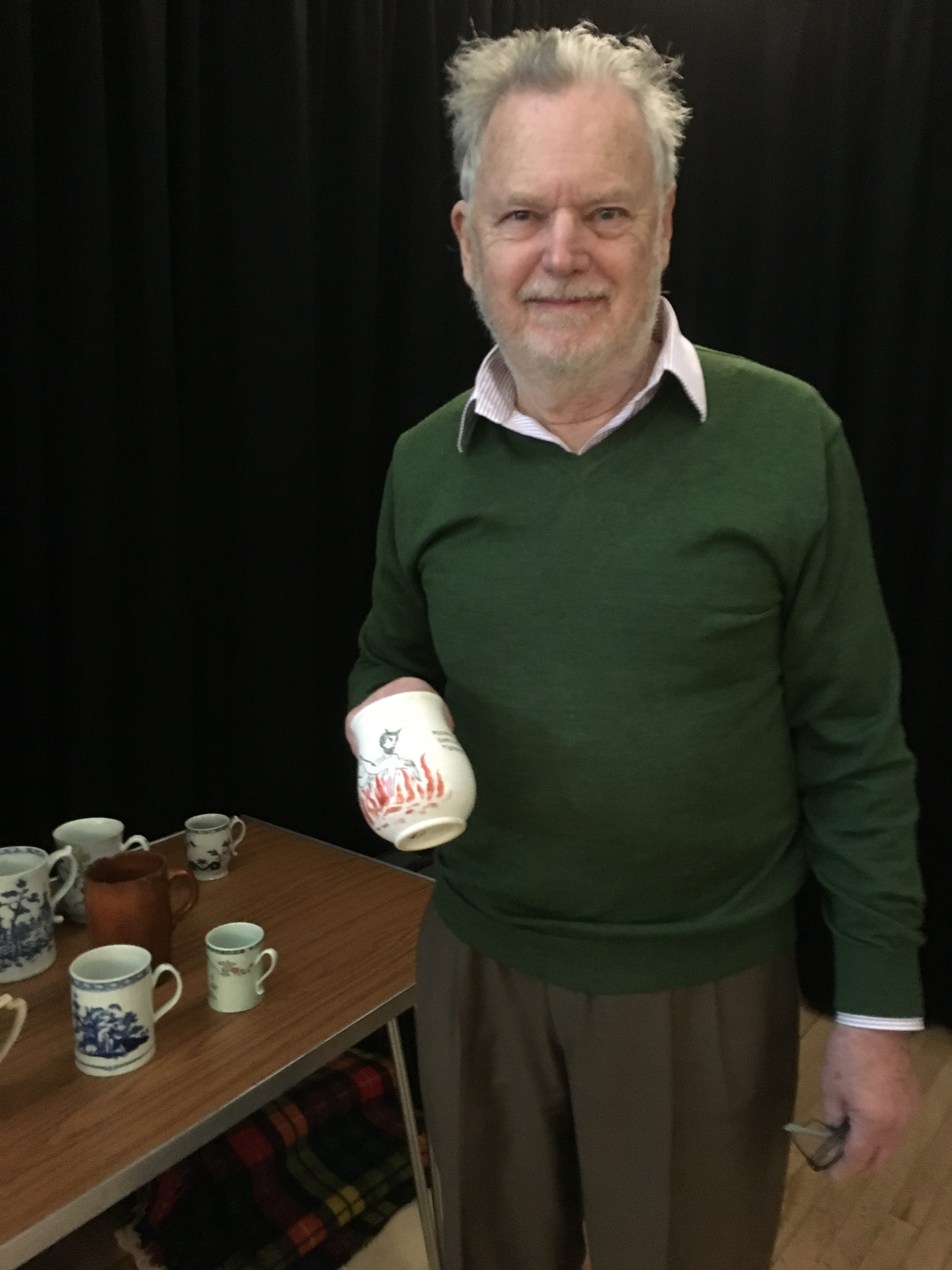 On Thursday 14th February 2019, the letter ‘L’ was the theme for Mike Turner’s entertaining and informative lecture called ‘A Mug Chasing Mugs’.

Mike’s interest in collecting began some forty years ago when an elderly aunt shared her collecting passion and gave him a Queen Victoria commemorative mug. It has no particular value today and amusingly he discouraged anyone from collecting limited edition mugs as they are usually worthless!

The collection now boasts over two hundred British mugs which predate the 1800’s. To bring the presentation together in keeping with the ‘L’ theme, Mike produced examples, including mugs from London, Lambeth, Liverpool, Longton Hall, Lowestoft, Laine Delft and more.  All mugs are identified and dated, to within five years, based on information via word of mouth, from dealers, investigative writings or date marks.

Chinese porcelain was imported in vast quantities by the East India Company and there are thousands of examples on the market now. One piece from Mike’s collection is a Chinese porcelain mug dated approximately 1740. It is painted in ‘famille rose’ style or peony colouring, which is characterised by decoration painted in opaque over glaze rose colours.  The base of the handle on this example, shows a small reishi or Chinese heart shaped mushroom in relief. The reishi was believed to promote longevity. Mike went on to identify how the decorations developed, particularly the Chinese use of the peony, fence and rock – all of which have significance within Chinese culture. English Bow produced translucent, porcelain and the next example, dated 1755, was decorated in the Chinese style and includes the ‘mushroom’ at the base of the handle. A direct copy!

By contrast, another piece dated 1740, was of London Redware which had been dug out of a well in Billingsgate in 1897 during road excavations. It is noteworthy as it is clearly dated and still retains its wax seal. London Redware was typically used for drinking vessels in public houses.

The Liverpool factory produced the next example, made by Richard Chaffers and Company circa 1758, using clay or soap rock brought to Liverpool by ship from The Lizard in Cornwall.

Another mug, made from clay drainpipe moulds was produced in Fulham. At that time it became clear that the average man wanted drinking vessels at reasonable cost. A quirk of this particular design was an ‘extra’ in the bottom. Inside these mugs, clay rabbits or frogs were fixed. These would be covered by the dark sludgy beer. After the beer was drunk, the air hole would clear and the animal would ‘spit’, thus surprising the unsuspecting drinker.

In addition, Mike had brought more examples from his collection including Lowestoft blue and white, London Chelsea/Derby, William Reed, Longton Hall-William Littler, Worcester and Derby and Bianco sopre Bianco, Greek mythology depicted on Prattware and another particularly fine example of Creamware depicting Queen Charlotte. This is decorated in relief and specifically dated 8th September 1761, the date of her Coronation after her marriage to King George III.

Of course, Mike could not fail to mention the “Turner Mugs” of 1795 which were made from Feldspar stoneware. Apparently, Spode bought the patent for Fedspar but went on to discontinue production as it was too long lasting and durable and therefore not profitable.

Towards the end of the presentation Mike showed a very interesting example of a Liverpool mug dated 1790/91 which was emblazoned with the Bidston Hill signals – a system of flags functioning as a complicated semaphore early warning system for ships into Liverpool Harbour.

At the conclusion of the lecture, members were invited to handle any of the items but were reminded not to pick anything up by the handle!