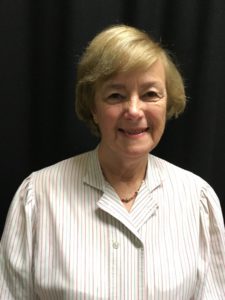 After a most interesting lecture on ‘Fine Dining’ last year, we were delighted to extend another warm welcome to Felicity Marno, Vice President of the English Ceramics Circle and previously of Stockspring Antiques.

Felicity has co-curated and been joint author of the catalogues of several academic exhibitions including ‘Tea, Trade and Tea Canisters’ and, with the English Ceramic Circle ‘The Ceramics of Vauxhall’ (2007). In 2015 she co-curated the important loan exhibition Sir Hans Sloane’s Plants on Chelsea Porcelain and co-edited the catalogue.

Felicity began by explaining that up to the mid 1600’s the only drinks consumed were beer, wine or water, but that all changed after the opening of new trade routes and the discovery of spices and herbs, including coffee, chocolate and tea. We were amused to hear that the earliest discovery of coffee could possibly be attributed to an Ethiopian goat herder who had recognised that his goats were more energised after consuming these beans! Monks threw the beans onto the fire. Thus the first roasted coffee bean was created!

Muslim traders first brought coffee to Europe and by the mid-sixteenth century, coffee, mixed with spices including clove and cinnamon, had become one of the most popular beverages for the upper classes.  The first coffee house opened in England in 1654 in St Michaels Alley, Cornhill and coffee houses became vital to daily commercial life. By 1668 there were 3000 coffee shops in London. Different coffee houses became significant meeting houses for example, Jonathan’s Coffee House (Stock Jobbers) was the beginning of the Stock Exchange and Lloyds of London.

In 1660 chocolate houses appeared and Felicity described the Aztec pouring technique (poured from a height and mixed with chilli).  In addition to ceramic tiles and artwork, she showed an example of a Meissen chocolate pot and Italian chocolate beakers which are now displayed in the British Museum as part of the collection bequeathed by Sir Hans Sloane. As a physician, Hans Sloane lauded the health giving properties of drinking chocolate mixed with milk. As a result, the “Necessaire” became fashionable and we were shown fine examples.

The East India Company introduced tea to England in the late 1600’s and it quickly became a popular alternative to coffee and chocolate.  One of the earliest types of English teapot is the Elers Teapot 1695 (Staffordshire) Displayed in the V&A museum collection, it is a fine example decorated with European parcel gilt mounts. It was small and expensive and was intended for a wealthy consumer of the newly fashionable tea. This design was inspired by the red stoneware pots imported from Yixing in China.

Fashionably, high status, teas were then served in bed chambers. Scent flasks were developed as tea canisters and their lids designed to measure tea. Pin trays then became spoon trays. In 1760-65 a form of tea service was established by Chelsea. Notably, there were no milk jugs until tea was being drunk.

In 1784, on the advice of Richard Twining of the Twinings Tea Company, the British Parliament reduced the tax on tea from 119% to 12.5%, effectively ending the smuggling trade and stimulating the tea trade in China for the British East India Company. This huge reduction in cost brought tea into the reach of the common man.

There can be no doubt that the dynamic development of the porcelain industry in Europe and particularly in England followed on the back of tea importation.