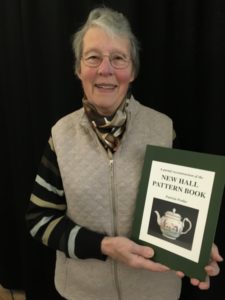 Pat Preller gave the first talk of our new year on “New Hall and Related Factories”.  Pat is an expert on printed British pottery and has published two books on the subject of New Hall.  David Holgate’s book ‘New Hall and Its Imitators’ (1973) sparked her interest in New Hall.

The New Hall Company is historically linked with two hard-paste factories in Plymouth and Bristol under the direction of William Cooksworthy and Richard Champion, who carried on successfully for a decade or so before the business suffered under the export restrictions imposed during the course of the American Civil War of Independence and although Champion tried to circumvent these measures, it was without success.  Eventually the patents for the production of his hard-paste material were disposed of to a consortium of Staffordshire potters, Messrs Hollins, Keeling, Turner, Clowes and Bagnall.  This consortium took control of the Champion’s business and in 1781 started production in an existing pottery belonging to Keeling in Tunstall, Staffordshire.  However this arrangement was not to last and disagreements between the partners resulted in the departure of Turner and Keeling with the remaining members relocating the business to Shelton Hall, which belonged to Thomas Palmer.  To avoid confusion, as Shelton was a common name in the area, it duly became Shelton New Hall and shortened to the New Hall.  New Hall continued until 1835 when the site was sold for development and today there is a supermarket on the original site.

Pat showed a comprehensive selection of slides of New Hall output highlighting the variety of patterns and illustrating comparisons to the related factories.  New Hall produced practical domestic china – jugs, bowls, dinner services, dessert wares, punch bowls and a great many tea sets.  Pat explained how to identify New Hall by its distinctive features – its handles; pedestal bases and spouts for example.  The mark on the bases was often the pattern number preceded by a script “N” or the letter “No”.  Often the patterns were quite distinctive although similar to other factories – sometimes trimmed with gold leaf, which made them look very sophisticated.  Gold however was used quite sparingly at New Hall.  Many Bristol shapes and patterns were retained and as time went on, a limited range was decided upon, notably teapots.  Cream jugs were made to correspond with the teapots.

New Hall Pottery is sometimes know as the “sprig” because many of the designs include a basket of flowers accompanied by scattered sprigs and has now become very collectable.  There is an extensive collection in the V & A Museum in London including the “insect” decorated water jug and examples of Fidelle Duivivier’s work – a fine decorator of Ceramics, along with many other examples of cream jugs, tea bowls, mugs, teapots et cetera. 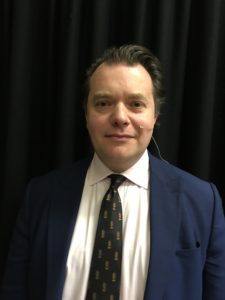 Imagine a banqueting table adorned with Meissen porcelain, initially ‘in the white’, but now painted in glorious colour with large and small sculptures, exquisite centrepieces and pastoral scenes, or a dessert table displaying exotic fruits and spices in exciting new shapes, replacing the sugar sculptures of the past.

This leads us to our March 2018 lecture in which we saw the enormous influence that Meissen had on porcelain production in Georgian England. We were shown slides of rare pieces of Worcester, Chelsea and Bow displayed in museums such as the V&A or in private collections, all early Georgian and, of course, it started with Meissen.

PORCELAIN IN THE SILVER TASTE

Our lecturer this month was Paul Crane, is an independent Porcelain historian and researcher. He trained at Christie’s and for a number of years he was European Ceramics Specialist at Phillips. He is now with the Brian Haughton Gallery. Paul is a descendant of Dr. John Wall, founder of the Worcester Manufactory.

The lecture started with a piece of 1750’s Dr. Wall (First Period) Worcester porcelain in the ‘silver taste’; a rare white chinoiserie teapot, moulded in the round exemplifying the form of early Georgian silver, with its simulated chasing work in silver and multi-layered attachment of the spout. This teapot, accredited in a 1960’s catalogue, was bought by a private collector.

Paul then took us to the beginnings of porcelain in the West and to Augustus the Strong of Saxony, King of Poland, who was to play such an important rôle in its development. It was fuelled by his passion for Chinese porcelain, of which he had a vast collection. The formula for porcelain had remained a mystery until Johann Bottger, an alchemist working for Augustus the Strong, discovered the secret after years of experiments whilst under ‘house arrest’ at his castle.

As a result The Royal Meissen Manufactory was established in 1710, initially copying the blue and white chinoiserie designs of the Far East. Johann Irminger, Royal Silversmith, was charged with the design of new models derived from Baroque silver shapes initially and multicolour enamelled painting was introduced in the early 1720s, but it was Kändler, Meissen’s Chief Modeller, who brought it all to life with his creative new ideas and shapes. He created the famous Swan Service in 1737 with over 2,200 pieces, based on the scallop shell, including opulent centrepieces, candelabras, tureens etc, all executed in the highly fashionable ‘white gold’. A menagerie of life size animals and birds was produced for Augustus’ Royal Japanese Palace, based on prints and live animals and illustrating Kändler’s skill as Chief Modeller. By 1740 his exquisite figurines in the Rococo style, candelabras, centrepieces and exuberant table porcelain were displayed in all their glory on the tables and in the houses of Europe’s aristocracy.

Paul’s lecture returns to Georgian England, where new forms of silver, inspired by London silversmith Paul de Lamerie, replaced the earlier Baroque style. His plainer, more fluid, Rococo style reflected the latest ‘silver taste’ of London Society in the 1730s. So popular was Chinese and Japanese porcelain, that it was replacing silver on the dining table as a sign of wealth and status.

We now return to Dr. Wall and Partners. Shortly after starting up the Worcester Manufactory in 1750, Dr. Wall bought out Lund’s of Bristol, acquiring the stock, moulds and working materials that they could work on. By 1755 they were producing the finest blue and white teaware. Although some early Worcester was influenced by oriental forms, most derived from contemporary silverware. After the Industrial Revolution, the growing middle class could now afford such items as fine tea sets and tableware and at Worcester they started printing on porcelain – like engraving on silver – and by 1760 they were able to offer blue and white wares in greater quantities and at prices that competed with imported Chinese porcelain. Commissions for dinner services followed and simpler shapes for teaware that heralded the Neo-classical era.

The Chelsea factory started to manufacture porcelain in 1745 under the ownership of Nicholas Sprimont, a celebrated silversmith, and early silver shapes were superseded by his English Rococo designs with their naturalistic forms. His creations included the Neptune centrepiece, described as the purest Rococo recreation in English silver. Silver shapes and forms translated into porcelain and his figure sculptures were produced as a major art form. Early wares were in white porcelain where the moulded ornament is the only decoration, following the ‘silver taste’ which appealed to the aristocracy and emerging middle class. Sumptuous painted ornamentation and tableware followed, influenced by Meissen and Sèvre. New porcelain forms and shapes were invented at Chelsea and tureens shaped like animals and birds, and all manner of botanical vegetables and plants, were displayed in dazzling splendour on Georgian tables.

Silversmiths, modellers and artists were inspired by paintings, books, engravings, and as the Early Period moved on to the Neo-classical phase, drawings from antiquity also played their part.

Thank you Paul Crane for a fascinating and insightful lecture on the transition of silver to porcelain, which certainly captivated and enthralled us.