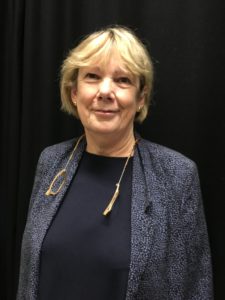 Mary White is on the Committee of the English Ceramics Circle.  With her husband Peter, she collects Chinese and European, particularly English, ceramics influenced by the Chinese porcelain that flooded into Europe from the C17 onwards.

The title of Mary’s talk, “Beyond Representation”, comes from the view of C17 Chinese scholars, that art and artists should strive to adopt the principles and emulate the achievements of the ancient Chinese masters.  Mary focused her talk on the scholar, civil servant, historian, collector and connoisseur Zhou Lianggong (1612-1672), who typifies the collectors and patrons of contemporary artists who stimulated the development of traditional Chinese blue and white porcelain.

Zhou lived through the turbulent period of the collapse of the Ming dynasty (1644), and its gradual replacement by the Qing.  As an eminent scholar, he reached the highest levels of civil administration, holding extensive responsibilities.  When the imperial kilns in Jingdezhen, the foremost centre of ceramics production, were sacked, and imperial orders for pottery collapsed, producers were quick to exploit the emerging market among the wealthy and powerful scholar-administrators.

Chinese artists traditionally looked to the past for inspiration and guidance.  Patronage of new artists by the scholar-administrator class led to an explosion of manuals such as “The Mustard Seed Garden of Painting”, containing guidance on everything artists should be painting, and how they should represent it.  Mary used the portrait of Zhou to demonstrate the approved iconography of the time:  the harmony of the female Yin (represented by the earth and water) and the male Yang (represented by mountains symbolising heaven and eternity).

Scholars and their pursuits were also important subjects – generally as participants in the natural scene.  The scholar was frequently pictured at his desk engaged in painting and calligraphy, with ink stones, brushes, brush pots and paper, often with a group of friends, attended by the much smaller figure of a servant.  Poetry, music, chess andtea-drinking, with its extensive paraphernalia and formalities, were important cultural activities.   The scholar was often depicted in a boat, since waterways were often the most convenient way of travelling into the countryside.

The explosion of manuals like the “Mustard Seed Garden” stimulated production of woodcuts of paintings;  these were used to transfer the images to porcelain. Jingdezhen was a forbidden city to Europeans, to safeguard the secrets of porcelain-making; however through trade between Canton and Europe, orders and commissions increased. Chinese forms and decorations developed from the traditional tiny tea vessels to esoteric items like sugar casters ordered by Europeans, and scenes would include women, birds and figures from western mythology such as Orpheus with his lute.

Important English producers making early copies of Chinese porcelain were Bow, Bristol, Worcester, Vauxhall, Chelsea, Liverpool and Limehouse, in the mid-C18. European imitators sometimes misunderstood the symbolism and misinterpreted the images:  hermits’ pavilions became churches or houses, and the natural landscape became dominated by human figures. By the late C18 the European taste for a wider range of colours, with Chinese influence perceptible in details within predominantly European scenes.

Mary illustrated her talk with slides of ancient Chinese paintings, and with examples of both original Chinese porcelain and later European copies.  The enthusiasm with which her talk was received was reflected in the range of questions from the audience, who clearly found the topic very interesting and enjoyable.