Yet again the annual discovery day proved a popular event, not least because the speaker, Will Farmer, has proved in both his many television appearances and his previous visit to Haywards Heath that he is extremely knowledgeable and hugely entertaining.  This year his topic was “Rene Lalique from Gold to Glass” and was accompanied by an extensive number of photographs of the work described.

The morning session focused on Lalique’s early life as a silversmith and jeweller and how he became a leading light in the evolution of Art Nouveau.

Born in 1860 Lalique left his home in north eastern France and was apprenticed with the goldsmith Louis Aucoc, on the outskirts of Paris.  However in 1878 he left France and enrolled at the Crystal Palace School of Art in Sydenham, because at this time the UK was the centre for progressive artists and designers.

Returning to Paris in 1880 he found that French taste had become less traditional and that interest in innovation was much increased.  As a result his earliest work in wallpaper and fabric design was well received, however he decided to focus on jewellery for the next 30 years.   Initially Lalique worked as a freelance and nameless designer for the top Parisian houses, however having acquired a fully functioning workshop he began direct sales.  His imagination and inventive designs of broaches and decorative hair combs proved very popular with the fashionable ladies of Paris in the late 19th century.  Will showed photos of a wide range of the clever use of ivory, bone and semi-precious stones which elevated Lalique to the top of his profession.  However it was stressed that many of the more exotic pieces were designed to be admired rather than worn, which didn’t always please the critics.  The first major showing of his work was at the 1887 Paris Exposition but under the names of the established houses he worked for.  He subsequently took on additional workshops and built a workforce of 30 skilled workers and 1891 saw his first use of glass.  His reputation soared, particularly when Sarah Bernhardt who by that time was deemed the world’s finest actress became his best client.  He also began to supply Samuel Bing who was deemed the father of the Art Nouveau because of his shop La Maison de L’Art Nouveau.  He was also adopted by Calouste Gulbenkian, the Armenian born English businessman and philanthropist, who became an avid collector.  By 1900 when he first exhibited under his own name at the Paris Exhibition, Lalique was the undisputed leading designer of decorative and creative jewellery.  It is estimated that over 50m people attended the exhibition and Lalique was the star.  Indeed his influence was so great that the “rules” of French jewellery design were changed to include what were referred to as his ‘vulgar’ materials, bone, ivory and glass.

After lunch Will moved on to the area more familiar to the general public, Laliques’ work with glass. While he was already well known for including innovative glass designs and enamels in his jewellery and had designed the glass doors of his new premises in Paris in 1902, it was his work when commissioned by Cote to design perfume bottle labels which really changed his life.  It became quickly apparent that rather than just designing the label it was possible to create a bottle which attracted attention.  This could be deemed the birth of packaging as a marketing tool and he subsequently worked for a number of perfume manufacturers.  Cote subsequently commissioned Lalique to design the doors for the new shop opening in New York which provided a whole new audience and in 1910 Lalique exhibited in Buenos Aires.  In 1911 he closed all his jewellery workshops to concentrate on glass and amongst all the other work being undertaken produced virtually all the glass bottles and medical equipment needed by the French military from 1914-1918.  At the end of the war Lalique opened a 12 acre factory and went into mass production.  Because full lead crystal proved so difficult to work with given the focus on design he worked with both blown and moulded glass.  Between 1920-1930 he designed over 700 vases etc and at its peak the factory was producing 2,000 pieces a day.    At the 1925 Paris Exhibition the work of Lalique was all over the place, with designs for Sevre, bottles for the perfume houses, his own pavilion and the central huge glass fountain.  Sadly everything was disposed of and the fountain dismantled at the end of the exhibition.  Nevertheless his place at the forefront of the Art Deco movement was secured.   Maybe the pinnacle of his success were the illuminated coloured glass columns  which he incorporated when commissioned to design the dining room and ‘grand salon’ of the SS Normandie, at that time the finest new trans-Atlantic liner.  Less well known but equally impressive is the glass work within St Matthew’s church at Millbrook on Jersey.  Will showed a number of photos of both, with the glass font at the church producing the “Ah” moment of the afternoon.

In the early 1930’s Lalique began to design motor car bonnet emblems incorporating electrical diodes which caused them to glow at speed.  These are now as much sought after as all Lalique pieces.  By the end of that decade Lalique employed over 600 at his main factory but the Nazi invasion halted progress and much of the finest work disappeared or was destroyed.  Rene Lalique died in 1945 but the company continues to evolve and produce a wide range of designs both old and new.

Lilique was a master craftsman and designer whose influence on the decorative arts of the late 19th and entire 20th centuries cannot be overestimated and Will Farmer provided a wonderful insight into his subject with the benefit of wonderful illustrations.  He also reminded us that while there are examples of Lalique’s work in all major world museums the finest collection is that of one of his most loyal customers and benefactors in the Museu Calouste Gulbenkian in Lisbon. 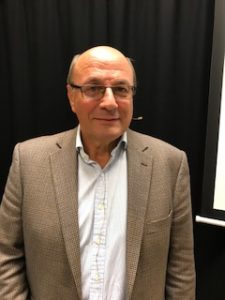 We were delighted to welcome back  Nicholas Panes who introduced us to the puzzle of Isleworth Porcelain and to the story of its rediscovery in 1998.

The Isleworth Porcelain Factory was established in 1757 by Joseph Shore and apparently, much was known about it in Victorian times. Its porcelain was collected and written about but incredibly was completely forgotten during much of the 20th century. The rediscovery of the factory, following exciting archaeological finds by the side of the river Thames in 1998, surprised the pottery community and interest revived quickly.

Nicholas explained that the site, having been rediscovered, is protected as a Scheduled Monument. Recent research shows Isleworth as one of the smaller London factories but its archaeology is the best preserved because its site was never built over. For that reason Historic England put the Isleworth Porcelain Factory site on the Heritage List which means that any construction projects within the protected area now need special permission.

Interestingly, a very important pair of underglaze blue moulded vases, circa 1770-75 from Syon House are attributed to Isleworth and were one of the first examples to be identified. The house is situated only one mile from the factory on the Thames.

A further dramatic find of Isleworth sherds in 2002 resulted in the publication of a catalogue (linked to archaeology on the site) jointly by ECC and the Museum of London. (MoL)  As a result, many pieces were offered for publication in the ECC/ MoL book. Whilst some of these were unlikely additions, a few were accepted for inclusion at the back of the book as ‘Possible Isleworth Pieces’. This section of the catalogue was set aside for pieces with some characteristics felt to be Isleworth but for which no excavated evidence had been found during the archaeological field work. The Goulding bowl was donated by descendants of Shore to the V & A museum. It is found there today and was finally attributed to Isleworth after the 2002 finds.

The search for confirmation that a number of pieces, tentatively or firmly attributed to Isleworth has been largely unsuccessful and Nicholas went on to discuss comparisons with Bow pottery. He pointed out the differences in certain brush lines, fluting and angular patterns on a selection of printed ware and the diagnostic features of the Fisherman pattern and the Plantation pattern, supported by archaeology.

However, Nicholas went on to explain that new chemical analyses testing techniques, some of which are very invasive, on Isleworth and Bow pastes, throw some doubt on whether everything being sold as Isleworth is actually from the factory. Classification is extremely difficult. Under glazed blue recipes are contradictory and the debate continues.

What is very clear is that Isleworth has an important place in London’s ceramic history. It is a rare porcelain which is therefore very expensive.

Nicholas closed the lecture with the suggestion that we should all ‘keep looking’!