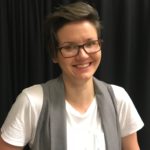 The title of our October lecture was “The Making of a Model Pottery” – referring to Middleport Pottery, built in Burslem, Stoke, on the banks of the Trent and Mersey Canal. This new factory was considered to be the most modern factory of its day. It was to become the home of Burleigh ware (brand name derived from its founders, Messrs Burgess and Leigh) until the present day, and is England’s oldest Victorian working pottery.

What made this lecture stand out from others was the engaging way that our Speaker, Jemma Baskeyfield, told the story of pottery making on a grand scale from Victorian times to the present day. She held the members’ attention throughout with her enthusiasm and commitment to Burleigh and Middleport.

It began for her as a young person in the eighties, surrounded by factories and living a few streets away from Middleport Pottery. Her interest began on an Open Day when she at last entered its imposing gates and visited their beautiful shop. She decided then that she wanted to work in that environment so changed one occupation for another, developing a love for the Pottery as she progressed; quite a change from her previous job as a trained mechanic in the motor trade! 16 years on Jemma is Burleigh’s Retail Manager and Company Historian, as well as custodian of its archive spanning 160 years. Over 25,000 moulds still exist and are used today.

The Burleigh Collection features a range of patterns in blue and white, including Regal Peacock (very popular in Japan and South Korea) and first produced in 1913 in honour of King George V, the pale asiatic pheasants and many more interesting shapes and sizes of domestic ware.

Middleport Pottery and Burleigh Ceramics proved to be the last Pottery in the world to use underglaze transfer prints on tissue, a process dating back 200 years. Designs are transferred from a hand engraved copper roller on to tissue paper and then on to the pottery, using the same moulds and utensils that were on site in Victorian/Edwardian times. These skills were almost lost when the factory eventually fell into a state of disrepair because of lack of money and was on the verge of closing.

In 2011 one of Prince Charles’ Charities, The Prince’s Regeneration Trust, bought Middleport Pottery, spending £9million over 3 years. The roof was repaired and essential restoration of the original buildings was undertaken so it could continue as both a Pottery and Visitor Centre, showcasing the history and heritage of Burleigh Pottery and the building itself. Burleigh remains a separate entity, as tenants of Middleport Pottery, and uses under half of the building, creating space for other local businesses to rent, which in turn allows Middleport to function financially.

Denby Pottery Group owns Burleigh Pottery, and by bringing Leeds Pottery and the Poole Pottery under one roof, all housed in Middleport, Burleigh will continue to thrive.

The lecture ended with Jemma taking numerous questions from the floor and receiving well deserved praise for her excellent presentation.

For those of you who are interested, the Great Pottery Throw Down took place at Middleport Pottery. 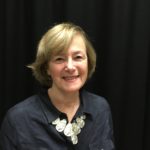 Our speaker on 12th September was the knowledgeable ceramicist Felicity Marno, Vice President of the English Ceramics Circle and previously of Stockspring Antiques. Her talk was about the history of fine dining, often a festive experience with beautiful place settings.

By 1602, the French were leaders in cuisine, although there were no dedicated dining rooms until 1720s. The table would be set up in the middle of the room, chairs moved from the side of the room and replaced after the meal.  The guests helped themselves after the servants placed the dishes on the table. Special guests would eat in a banqueting house built sometimes on the roof or separately in the garden. This gave privacy and seclusion from the main household. Such buildings can still be seen at many of the grand stately homes.  Sugar, being very expensive, was used to make elaborate creations often as part of the central decoration on the dining table.

Charles II (1630-1685) changed the style of dining to the ‘French Potagier’ (soup maker) and French cooks became the fashion. ‘Dining a la Francais’ was introduced although guests still helped themselves to food.  New designs of porcelain became necessary as the type of dishes changed and in 1705 the first dinner service was produced, using a Rococco form.  Sauces were an important addition and included ketchup from China, soya sauce from Japan and dry mustard. By 1755 exotic birds were appearing on Chelsea tureens and sauce boats.  Boxes for cutlery were introduced in the same period.  All the great factories were producing matching dinner services to fulfil the demand for the new fashion

Dining ‘a la Russe’ in the 19th century became much more fashionable with menus becoming more elaborate and with servants handing the food to each guest.  Nowadays, at home we eat ‘a la Francais’ when en famille but use ‘a la Russe’ for formal occasions.