We were delighted to welcome Dinah Reynolds to our group in Haywards Heath in May and enjoy the most vibrant and entertaining presentation.  Dinah is an accomplished lecturer and writer and an authority on British ceramics. She has worked for several years on the Ashmolean Museum Collection. Dinah’s lecture was entitled “Paintings on Pottery in Italy”.

There is some confusion surrounding Majolica which is the name that has been adopted for all objects that were traditionally ceramic, such as dishes, bowls, serving vessels, and jugs of all shapes and sizes that were decorated with coloured lead glazes.  While Maiolica is technically the refined, tin-glazed pottery with opaque white glaze which became popular during the Italian Renaissance. The process was also used as a medium for sculpture and sculptural relief.  Dinah showed many slides of Majolica Italian Renaissance painted pottery most of which can be seen in the Ashmolean Museum. It was explained that the paintings were not related to the actual use of the pottery as the shape determined the style of painting. 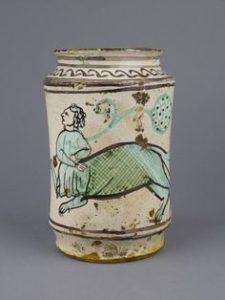 The first example shown was of a 14t h century pharmacy jar or albarello from Tuscany. A type of majolica earthenware jar decorated with a woman falconer and a centaur.  These jars originally were designed to hold apothecary’s ointments and dry drugs. The development of this type of pharmacy jar had its roots in the Middle East during the time of the Islamic conquests and during the Renaissance there began a rebirth and looking back for inspiration. The tin glazing process had emanated from near Cairo but had spread up through Sicily and Southern Spain.

Another extraordinary piece shown was decorated with a painting of Diana and Acteon and dates from 1495. The inscription translates as: By the water which thou hast cast upon me with thy hands I am made a stag and killed by my hounds. This magnificent dish is one of the world’s earliest and most remarkable majolica dishes depicting a story. In the centre the hunter, Acteon, is killed by his own hounds after being turned into a stag by the goddess Diana. Around the rim is the battle of the Lapiths and Centaurs. The myth of Diana and Acteon has been a popular theme for many paintings but interestingly during the Renaissance nudity could only be depicted when part of a religious story.

Dinah went on to show us many more fine 15th and 16th century examples including Hercules and Hydra by Guido Durantina, The Callumny of Apelles by Urbino. Retreat of Xerxes 1537 based on a woodcut by Girolamo ~Grandi 1533. St Luke by Guido di <Merlino 1543 . (St Luke is always depicted as a bull.) The Campaigns of Julius Caesar by Urbano 1561-1575 which on this particular piece has three pairs of moulded swans on the bottom. Departure of Pessaro which is the latest acquisition by the Ashmoleum and appears to be based on woodcut from the Italian version of Ovid’s Metamorphoses published in Venice in 1497. Dinah explained that artists were dependent upon these engravers and each painting had to tell a story as most people could not read.

Guiding us to the 18th century Dinah showed some of the work of the great painter of Siena, Maria Campoli.  The 1730 Adoration of Shepherds, Neptune in his Chariot of 1749 and finally “Truth Invented by Time” which it was explained is the Coat of Arms for the 1st Marquess of Rockingham and was acquired by the museum in 2007.

The Ashmoleun continues to collect both Majolica and Maiolica! 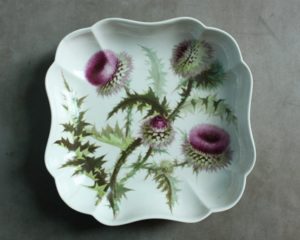 How did it come about that at the turn of the 18th century a white plate with beautifully painted thistles was the inspiration for a book that was published in 2011?  George Drury, the speaker at our April talk, revealed the story of the man that painted the exploding thistle and how George has followed the trail of the plate to bring back to life the story of William Pegg. How his skill at painting flowers, insects and animals brought him into conflict when he became a Quaker.

William Pegg was born in 1775 at Newcastle under Lyme. He started work aged ten in the Derby factory but his skill at painting was recognised and he progressed to studying the painting of plants and flowers.  By the time he was 21 he was offered a contract as a flower painter at the factory and joined a number of other expert painters there.  At this time, painters didn’t sign their work but with experience it has been possible to recognise the examples of his work by colour, style and skill.  He became a Quaker in 1800, and left his job as it was against the Quaker movement’s ideas to create images.  He searched widely for other employment for 12 years but found it impossible to succeed and faced real poverty, so returned to the Derby factory in 1813, having spent some time preparing for his return by filling two sketch books with flowers, fruits and vegetables, still to be found in the Derby Museum.

In1817 while away he wrote about his feelings of ‘acting contrary to his continuation in the china industry’. He had married Anne in 1814 and she supported his decision to leave the factory and they opened a corner shop near the factory and were known to support those having hard times.

We are lucky enough to know about William ‘Quaker’ Pegg’s life because of a book published in 1876 by John Haslem, ‘The Old Derby China Factory’ which contained many details of letters from Pegg to his mother, his wife and other correspondents from two periods of his life. Haslem lived next door to Pegg, was a master enameller and remained in the porcelain world for many years.  So with the book, the sketch books and other records from the Derby Museum we know so much about William Pegg and today can enjoy his glorious work, illustrated in Mr Drury’s excellent book.