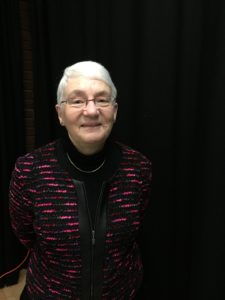 HHCG were delighted to welcome Kathy Niblett who was making a return visit to our Group. Her presentation was entitled Slipware Alive!

Kathy explained that a collection of Slipware has been looked after in the Potteries Museum in Stoke-on-Trent for over 20 years and a whole class of these museum pieces can be easily placed, since they are generally inscribed and/or dated.

The production of pottery in Stoke-on-Trent dates back to at least the 17th century and a book written in 1686 by Thomas Plot entitled The Natural History of Stafford-shire (1686), is an eye witness account of the manufacture of slipwares in Burslem which is one of 6 cities that make up Stoke on Trent. Plot’s explanation is brief but explicit at that time and it is known therefore that the best clay was close to coal. Most of the roads in the Potteries were in a poor state in the 16th and 17th century, and this was not helped by the habit of some of the poorer potters of the time digging their clay in the roads – a practice that gave rise to the term “potholes”!

Kathy went on to describe the colours of slip when worked and how it was decorated once dry, using a slip filled cow horn which would have had a goose quill fixed in the open top. This process had to take place speedily before the newly applied slip dried into the ‘ground’, and became unworkable. This technique was a highly developed skill.

Photographs of hollow wares including cups, posset pots and porringers were introduced plus examples of the flat wares which were dishes or plates for serving food or for display. Flat wares could be thrown or press-moulded. The latter would have a ‘pie-crust’ rim-edge decoration. It was sometimes possible to see that this was impressed using a cockle shell. Vessels of buff earthenware with jewelling, internal cream-coloured slip coat and an external dark-brown slip coat with a combination of trailed and feathered bands and stylised tulips are common in excavated groups from Burslem. She also showed fine examples of decorative work including a slipware model cradle. These were inscribed and thought to have been given as wedding gifts.

Thomas Toft was the most important Staffordshire slipware potter. His pieces which date to the last quarter of the 17th century are the most famous of all English slipwares. Themes used by Toft include coats-of-arms, crests, and other emblems, as well as figures of royalty.

One special example from the museum is Ozzy the Owl and was acquired by them in 1990.  Ozzy is a ‘rare bird’ and a valuable one. He’s the 17th century brown and black slipware jug which caused a sensation when brought to an edition of BBC TV’s Antiques Road Show. The owl, whose head comes off to act as a drinking vessel, was made between 1680 and 1700, and was thought to be one of only six originals in the country. The decoration was produced using slip or liquid clay, which was trailed on using a technique similar to cake icing, and then mixed together using a comb to give the marbled effect.

Finally, the pride and joy of the collection – a Staffordshire Slipware ‘royal arms’ charger (two holes for hanging and over 20” in diameter).  The cream-coloured ground is trailed with dark-brown and light brown slip and is decorated with the Royal Coat of Arms of Charles II. The lion and uniform flanking the garter and motto, “HONI SOIT QUI MAL Y PENSE is signed Thomas Toft, and has a broad border of trellis pattern, enriched overall with cream dot ornament.

This was an absolutely fascinating talk and gave the members an enormous insight into the workings of slipware in the 17th century. It was very well illustrated with pictures of many unique examples. We look forward to another interesting lecture from Kathy very soon.