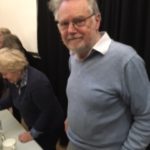 For our first talk of the New Year, one of our members, Mike Turner, gave us an interesting and informative talk on drinking mugs, entitled “Mike’s Mugs – A Canter through British Ceramics”, showing how such a simple product evolved over time and became a key product for so many of the major factories.

Mike’s career as an airline pilot took him all over the world and often on stopovers he found himself with time on his hands which he used to explore and find examples for his collection which now boasts over two hundred mugs, split between porcelain and earthenware.  His collecting started some forty years ago with an elderly aunt, also a collector, encouraging and passing on her extensive knowledge.

His collection of British mugs covers a period from 1702 to 1902.  Mugs are very individual pieces – drinking vessels with no saucers – sold separately and possibly used as an example of the factories’ work to show off their best pieces.

Mike explained that some of the early mugs had “platinum” rims as this does not tarnish – his first example was in fact one produced by Sampson in Paris in 1880.   His illustrations showed early red clay mugs, which were produced in London in the early 1700’s – very unsophisticated and probably used in the public houses of the day. Later examples showed how British ceramic makers not only were copying Chinese designs but by 1760 London factories were also producing a version of “Delft” ware which was dripped in “tin oxide”. However these chipped easily so never achieved acceptance for everyday use.  Generally these early mugs have poorly finished bottoms as support stands for use during the firing process were not introduced until much later.

Mike explained how he was able to identify the factories by the style of the handles on the mugs and illustrated these with examples from Liverpool, Worcester and Longton Hall Potteries, to name but a few.  He also showed how the decorations developed copying the Chinese use of the peony, fence and rock – all of which have significance within Chinese culture, the Bow factory went even further by including the “heart” shape at the bottom of handles.

In the 1830/40’s it became popular to give mugs to children as prizes, for birthdays and for christenings etc, and it is from there that their use for presentations and commemoration use developed.  In his collection Mike has a Copeland “Christmas” mug marked 1867, however he is unsure if it was produced for that year, or in that year to be sold in 1868.

Mike had brought a selection of his mugs with him, which had been illustrated in his talk and members were able to examine them and ask further questions after the talk.