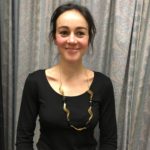 6, we had a talk on Porcelain and Enamel Snuff Boxes given by Alice Bleuzen, who was making a return visit to our Group.  Alice has a Masters Degree in the History of Art from the Sorbonne in Paris and having joined Sotheby’s in 2007 she is the specialist in silver and objects of vertu in both London and Paris.

Alice’s talk included beautiful slides illustrating snuffboxes, focusing on the earliest period of use from around 1400 up to the 18th century.  Snuffboxes even in the early days were very collectable with some people even having one for each day of the year and sometimes even more!  Women as well as men took snuff and therefore, many are of a more feminine design.

Alice’s talk was spell bounding and really opened our eyes to the influences which caused the continual changes in size, shape and design which make snuff boxes so collectable.

Because snuff boxes became a popular diplomatic gift considerable collections were accumulated by royalty and high profile individuals.  Frederick the Great of Prussia had a particularly fine collection. There are many impressive collections, particularly at the Wallace in London and the Wentworth Collection in New York’s Metropolitan Museum.  For those that would like further information on the subject the book ‘Bertrand’s Toyshop in Bath – Luxury Retailing 1685 to 1765’ by Vanessa Brett gives a fascinating insight into snuffboxes in this period.