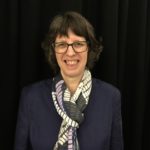 Pam Woolliscroft’s talk “The Josiah Spodes: Pottery Pioneers” captivated HHCG Members on 12 May 2016 with a presentation packed with photographs, films and animated slides. Pam presented her talk entirely without notes and showed her passion and infectious enthusiasm for her subject.

She began by describing the fascinating history of the Spode company of Stoke-on-Trent. She showed how Josiah Spode I, (1733 – 1797) born into a poor background, grew up learning the manufacture of pottery. At the age of 16 he went to work for Thomas Whieldon, the foremost potter of the time, and later went into business himself, developing two partnerships – with William Tomlinson and with Thomas Mountford. Spode I’s independence came in his forties when he purchased a ready-made potworks in Stoke in 1776.

His eldest son, Josiah Spode II (1755 – 1827) followed his father into the business from a very early age and showed an aptitude for both pottery manufacture and marketing. In 1778 Spode II set off for London with his wife and young family to create the company’s new retail business to market and sell wares from the Stoke factory. When his father died in 1797 he returned to Stoke to manage, develop and modernise the manufactory. Just a few years later, in 1806, Spode II enjoyed a Royal Visit to his works and subsequently became ‘Potter to the Prince of Wales’ and later ‘to the King.’

Spode I and Spode II, father and son, not only grew a huge worldwide business, making and selling pots, but they went further by developing interests in coal, clay and cobalt mining, securing a steady supply of the raw materials essential for commercial pottery manufacture. They also campaigned hard to get the required Act of Parliament to have a canal built alongside their factory in 1795 to ensure raw materials could be brought in and finished goods safely taken out.

It was fascinating to hear Pam describe how the Spode company grew from nothing, and her mentions of the fortunes and misfortunes of the family added to the human side of the story.

She then went on to show the vast range of wares produced by the company up to the end of the Spode ownership in 1833. Those wares included expensive dinner and dessert wares, for well-to-do families around the world, crested wares, decorative ceramics and architectural ceramics (Pam highlighted the amazing story of the Brighton Pavilion torchères.) A whole range of pottery bodies was produced from black basalt to bone china.

Spode remains famous for its two breakthrough innovations: the perfection of the technique of underglaze printing in blue, originally known as Blue Ware; and the invention of Bone China, originally described as English Porcelain. Pam explained how these innovations revolutionised the industry and Spode’s Bone China recipe was the industry standard for the next 200 years.

Pam’s talk brought together the Spodes’ inspiring story using well-known sources, more recent independent research, and her own observations to get the facts straight and to dispel some of the myths. She looked at the two Spodes’ early lives, their businesses and, of course, their beautiful pots.

Their success led to Spode being described as ‘…without doubt the most important factory in the 19th century‘ and Pam showed us why.

Pam Woolliscroft works freelance in the museum and arts world as museum consultant, art cataloguer, lecturer and Spode specialist. Her Spode presentations have been given all over the UK to a wide range of organisations. In the USA and Canada she has lectured at specialist ceramic museums and conferences.

After many years working in North Staffordshire museums Pam now works for a number of different organisations including Art UK – the project which provides the online home for every public art collection in the UK: http://artuk.org/

Pam was Curator of the Spode Museum in Stoke-on-Trent and has also worked at Gladstone Pottery Museum, http://gladstonepotterymuseumstory.blogspot.co.uk,  Chatterley Whitfield Mining Museum, https://historicengland.org.uk/listing/the-list/list-entry/1015947, and Ford Green Hall where she was resident curator https://fordgreenhall.wordpress.com .

She writes a regular blog about Spode History  http://spodehistory.blogspot.co.uk/

The Leach Pottery is considered by many to be the birthplace of British studio pottery. One of the great figures of 20th century art, Bernard Leach played a crucial pioneering role in creating an identity for artist potters across the world. The recently restored Leach Pottery site includes a new museum, created to celebrate the life, work, influences and legacy of Bernard Leach. Exhibition, gallery and shop spaces provide regular shows throughout the year showcasing work by leading regional, national and international studio potters

In 1920 Bernard Leach returned from Japan with Shoji Hamada  and established the Leach Pottery on a hill above St. Ives. They were soon joined by Michael Cardew, the first of a long line of young, would be, potters eager to learn their trade under the gaze of the master. Some of these students and apprentices left to set up their own potteries and so the Leach influence spread across the world.

David Leach was born in Tokyo in 1911, and was first taught to pot not by his father Bernard but by Shoji Hamada.  He joined the Leach Pottery in 1930 and had three sons who are all potters.