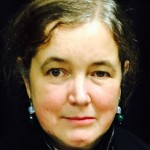 ANNE HAWORTH BA (HONS) is an expert in the history and culture of China. From 1995-2002 she was resident in Shanghai, China, visited ancient kiln sites and lectured to expatriate groups. In Autumn 2002 she catalogued the collection of Chinese Porcelain at Kensington Palace. Anne is a lecturer at the V & A, and a guide for private tours of the State rooms and the Queen’s Gallery at Buckingham Palace. She also lectures in British Painting for American students resident in London. From 1981-1995 Anne trained and became a senior ceramics specialist at Christie’s and Bonhams head offices.  From 2002-2005 a committee member of the French Porcelain Society. 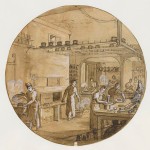 The small round print, La Chapellerie shown depicts the inside of a Parisian hat maker’s shop in the early-19th century and was recently acquired by the Victoria and Albert Museum (fig. 1)  This print is a rare survival, attesting to the production of a dinner service from which the finished wares have all but disappeared. Known as the Service des Arts Industriels (Service of the Industrial Arts), the dinner service was produced by the French porcelain factory, Sèvres, during the 1820s. Consisting of 180 pieces, the service represented 158 French technological crafts, from jewellery making to the processes used at the Sèvres factory itself. Painter Jean-Charles Develly both produced all the preparatory sketches and painted the wares by hand.

The history of the service is well known as a great deal of archival material survives at the Sèvres archives. It is likely to have been commissioned by Alexandre Brongniart, the then director of the Sèvres factory.  Brongniart was interested in technology and chemistry and became a member of the jury for the Exposition des Produits de l’Industrie Française (Exhibition of French Industrial Products). The service was commissioned following the fifth Exposition, probably as a means of illustrating the Sèvres Company’s renewal as a beacon of the French luxury industries under his leadership – industries Brongniart had ample time to study as a juror for the Exposition 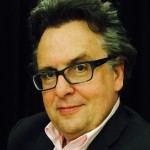 On Thursday 26th November, the Haywards Heath Ceramics Group hosted a Discovery Day at Clair Hall, with a founder member of the Group, Mr. Lars Tharp as Speaker for the day. Lars, especially well-known from the Antiques Road Show, was born in Copenhagen, studied Archaeology and Anthropology at Cambridge University and began his working career as an auctioneer at Sotheby’s. After sixteen years he left to set up his own company, and is now Director of the Foundling Museum in London, and Visiting Professor at De Montfort University, Leicester.

Lars took us on a wonderful tour from Jingdezhen, one of the most famous porcelain areas in China,   to Europe, explaining how the ceramics trade grew over the centuries. This culminated in the explosion of ceramics onto the European market with the involvement of the East India Company.   Lars showed us not only slides of the porcelain but also the countryside surrounding Jingdezhen which he has visited on numerous occasions for his own interest as well as to make television documentaries about the porcelain trade.

Lars showed the process of making fine porcelain from the clay found in the Jingdezhen region. This was ground to a fine powder and mixed with kaolin, named after Mount Gaolin, to form bricks of clay which are then moulded into vases, pots and other items.  The china was then transported on a long and hazardous journey from Jingdezhen across the Lake of Boyang, up the River Gan and onto Guangzhou (Canton). The china was then loaded onto boats which travelled from Asia, round the Cape of Good Hope and onwards to Europe.

There were influences on the porcelain reflecting visitors from other parts of the world, in particular the Middle East, with the colour cobalt and patterns from Persian carpets which figure in some of the designs. It is from these pieces of porcelain and researching their history that forms part of a greater understanding of human culture and trade over the centuries.

Europe, particularly England, became besotted with Chinese porcelain in the time of William of Orange and his wife Mary, who came over from Holland to succeed to the throne of England, Ireland and Scotland in 1689, bringing with them their tastes for china wares.  As European and English porcelain became more popular and techniques were refined, the trade with China started to decline in the late 18th Century.

There are magnificent collections of Chinese porcelain in the Charlottenburg Palace in Berlin, Burghley House and the Percival David collection now housed in the British Museum.  Also more locally there is a collection built up by the Gresham family at Titsey Place, Oxted in Surrey.

Lars finished the day by appraising objects which had been brought in by members.

It was a thoroughly enjoyable and informative day with lots of history and humour.