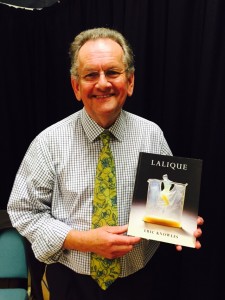 October’s talk “Emile Gallé & René Lalique” was given by Charles Hajdamach, a leading UK authority on glass.  He established the Broadfield House Glass Museum at Kingswinford 1980 and remained its Director for 23 years as it quickly became one of the world’s top glass museums.

The talk was extensively illustrated by informative slides depicting the progression of glass design throughout the lives of these two men. He contrasted the differences in style explaining that Gallé was symbolic of the poetry and art of the period inspired by William Morris; whilst Lalique focused on more graphic designing and industrial technology.

Gallé (1846 to 1904) was the son of maker of ceramics. He learned glassmaking at Meisenthal and joined his father’s factory in Nancy following the Franco-Prussian War.  His early work focused on using clear glass decorated with enamel, but he soon created an original style featuring, heavy, opaque glass carved or etched with plant motifs, often in two or more colours. In 1875 he married Henriette Grimm (1848-1914), who carried on his work for a further ten years after his death and published a volume of his glass designs, leaving a wonderful legacy of Galle’s work.  In 1873, he set up his own glass making studio and took over his father’s factory in Nancy. His career took off after his work received praise at the Paris Exhibition of 1878.  Within a decade a successful showing at the 1889 Paris Exhibition gave Gallé international fame and his style, with its emphasis on naturalism and floral motifs, was at the forefront of the emerging Art Nouveau movement. He was extremely patriotic and included the “Thistle” emblem of Nancy and Lorraine into many of his designs.  He incorporated marquetry within different layers of glass, and towards the end of his life became fascinated by underwater exploration and created marine glass to represent this interest.  He also exhibited at the Paris International Exhibition of 1900 and by this time his pieces were highly expensive. Many of Gallé works are can be seen at the Museum in Nancy.

Charles then moved to the contrasting style of René Lalique. While there is no record that the two men met, he believes they must as they attended and exhibited at the same events and exhibitions

Lalique was born in Ay-en-Champagne in 1860 and his early life was spent learning the methods of design and art he would use in his later life – also childhood holidays spent at Ay influenced his designs in later life, as much of his jewellery showcased plants, flowers and flowing lines. Lalique began working as an apprentice to goldsmith Louis Aucoc in Paris. After studying for time in England, he returned to France and worked as a freelance artist, designing pieces of jewellery for French jewellers Cartier, Boucheron and others.  In 1885, he opened his own business designing and making jewellery and other glass pieces. He specialised in corsages using diamonds, opals and other precious and semi-precious stones incorporating them into unique designs which really had the “wow” factor.  His masterpiece was a “Dragonfly” corsage made of gold enamel with moonstones and diamonds. It is suggested that he made jewellery for Sarah Berhardt, the famous French actress who demanded large pieces that they could be seen by audiences.

Lalique moved slowly into glass from 1900 onwards, he would instigate a wax model, which was then caste in paste and then into glass.    His main shop in Paris moved to a more fashionable area and Francois Cote, the perfumer, asked him to make labels for his perfume bottles.  This evolved into Lalique making the complete perfume bottle which were quite revolutionary at the time.  Lalique expanded to designing for most the well-known perfumers in France, including one designed like the Chrysler Building in New York.

Lalique created a wonderful fountain, over 50 feet high, for the 1925 Paris International Exhibition. In creating this great fountain, Les Sources De France, he was following in the footsteps of the  great French fountain builders dating back to the middle ages when fountains were first constructed to provide drinking water to the people of Paris!  Lalique knew he had conceived a great design, not just for the fountain in its entirety, but also in the style and motif of the large glass statues which were the fountain elements. As a result, he made a miniature statuette model in the style of the fountain statues set in his classic round centre piece, the Statuette De La Fontaine.

On a grander scale Lalique created the walls of lighted glass and elegant coloured glass columns which filled the dining room and “grand salon” of the SS Normandie and the interior fittings, cross, screens, reredos and font of St. Matthew’s Church at Millbrook in Jersey (Lalique’s “Glass Church”).  In contrast to Galle, Lalique used graphic design techniques making day and night clocks and later car mascots. Both his unique and commercial works are exhibited museums around the world including the Musée Lalique and the Musée des Arts Décoratifs in France.

Lalique too settled in the Alsace Lorraine region of France but died in Paris in 1945.  His work was continued by his son Marc (1900 to 1977) and then by his granddaughter, Marie Claude-Lalique (1936 to 2003). In 1998 the company was sold to a Swiss company Art & Fragrance, and the name of Lalique is still traded today.