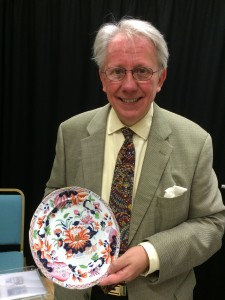 Harry Frost has long been a popular and frequent speaker at our lectures – in fact he refers to himself as a ‘yoyo’ visitor to us. He is the Curator of the Raven Mason Collection at Keele University and was  previously Curator at the Dyson Perrin Museum. His lecture this time, about the Mason family, gave us a detailed insight into the Potteries and their difficulties in the 1800’s.

Miles Mason, father of three sons, originally had a thriving import business for Chinese porcelain which was highly prized by the landed gentry for its brilliant colours and shapes. Less well-off people knew only the plain heavy china made in Britain.

When an embargo was placed on imports from China, Miles and his son Charles, lost their highly lucrative business but had the important understanding of just what shops wanted to have to sell. After much experimentation they developed, and mass-produced, a dense tough stoneware and in 1813 patented this as “ironstone”. At this time we were at war with both the USA and France which created a massive slump in the china industry with mass starvation and great deprivation in the Potteries. This new product was a lifeline for the industry and the Masons even bought a third factory just at the time of the lowest ebb the history of English china manufacture.

This new product was very durable and much of it was taken abroad by emigrants, especially to the USA where many of the biggest collections of Mason Ware survive today. The product line of kitchen ware was extended to include such items as vases and inkwells. Simple transfer patterns (rather like completing colouring books) and child labour were used to keep costs down. This was greatly welcomed as a way of increasing family incomes and was considered a service to the public.

As customers increasingly bought this inexpensive but very durable ware, more fashionable elaborate shapes were developed. As the material was not so refined as porcelain which could become noticeably misshapen if moved in the kiln, bigger and more highly decorated items such as enormous vases could be made. This caught the attention of owners of bigger stately homes who wanted decorative items which caught the eye of guests. Many were at least 1.5 metres high, highly decorated and gilded. Even whole fireplaces were made.