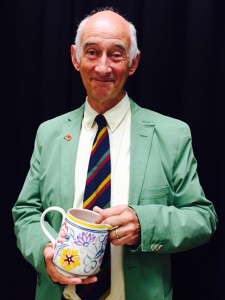 On Thursday 14 May 2015, Paul Atterbury, most famously known for his appearances on the Antiques Road Show gave members a true insight into “The Story of Poole Pottery”. Paul has been a member of the BBC Antiques Road Show for twenty-five years, and is also a lecturer, writer, broadcaster and exhibition curator. He specialises in the art, architecture, design and decorative arts of the 19th and 20th centuries. Also Paul also has a fascination for Railways and Canals.
Paul commenced his talk by explaining that whilst he is not an avid collector of “Poole” pottery, he has always been intrigued by it, being different from most English Pottery as it is made from the terracotta clay found in the region. On moving to Dorset about fifteen years ago, he was approached to assist Leslie Hayward in completing his book on “The Poole Pottery” – Leslie worked in the Poole Factory and therefore had a great insight into all the facets of the industry. Paul assisted Leslie by putting the information into a publishable form, and formed an enduring friendship.

Poole Pottery was originally “Carter’s Industrial Tile Manufactory” and it was this company that provided the financial foundation for the later “Poole Pottery”. The Carter Family were involved with Poole Pottery for six generations until its sale in the 1950s.

Initially in the 1850/60’s the main products were tiles and industrial products and in the early part of the 20th century Carters became a major producer of printed tiles with lustres and faïence designs, many of these were used on the outsides of public houses, in underground stations and even in hospitals.  It is still possible to find examples of these tiles in various regions of the UK.  Large scale production was possible because the factory was on the harbour side so ideally placed to receive coal deliveries and while an office was opened in London, Poole remained the headquarters of the company

There are catalogues remaining showing all the decorative tiles ranging from decorative terracotta for architectural use, building blocks made with decorative designs to be fitted together like a jigsaw – onto tiles used to raise the profiles of shops, butchers and fishmongers in particular. Later Carters moved into designs for W H Smiths for Books and Maps. Also, there was hardly a Public House in the Country which did not have a tiled frontage and a good number were from Poole. A few still remain today in Portsmouth and Bournemouth. The glaze which shone out in the gas light of the period helped people to find their way to the hostelry. The use of tiles was for ease of cleanliness and brightness. Also included was the manufacture of Hospital Tiles, which provided colourful wall features especially in children’s wards. Then as the thinking on “germs” changed, the tiles were deemed no longer hygienic.

In time, Carters being a progressive and forward-thinking company, moved into Commemorative Plaques, moulded in relief and glazed in such a way as to be photographic in look, also moving into decorative lustre and metallic glazes during the Art Nouveau period. Although these tiles still took second place to the industrial pieces.
In the 1920s Jesse Carter joined forces with designers Harold and Phoebe Stabler, and potters John and Truda Adams, who later became Truda Carter to form “Carter Stabler Adams”, who producing Art Deco ware.
“Carter Stabler Adams” embarked on expanding the business and one of the first works undertaken was a memorial fireplace commissioned for Rugby School in 1922 which is still in place today. At least one other cast was made and exhibited at the British Empire Exhibition. An identical figure of St George and the Dragon is on public display at Poole Museum. One of the most important commissions for Carters’ faïence department was the Durban war memorial, completed in 1925. The glazed structure is some 21 feet high.
At this time Cyril Carter separated the production of the tiles from the pottery, leaving the tiles under The Carter Company who , as such, produced much of the ceramic tiling used on London Underground stations built in the 1930’s and, of particular note, made the relief tiles, designed by Stabler, showing symbols of London – some of these can still be seen on stations such as Bethnal Green.
Continuing the entrepreneurial thinking of the family, Cyril promoted the business by opening a visitors complex, organising factory visits, encouraging visitors to chat and question the painters,  providing a café and gift shop which is still part of the tradition today, but in 1920 proved to be a very effective, whilst unusual, way of marketing. The factory produced small inexpensive items for the gift shop which the visitors, which by the 1930s were recorded at 80,000, could easily carry home.
“Carter Stabler Adams” eventually became “Poole Pottery”, and during and after World War II produced many lines, including Twintone and Traditional. Much of the traditional range was based on the work of the chief designer in the 1920’s, Truda Carter’s original designs were interpreted by “paintresses” who added their own individuality to the pieces, all of which were handmade.
The business was very family orientated not only with generations of the Carter family, but also with generations of the paintresses. All the paintresses signed the work with their initials and the pattern number was written on the base, which indicates the year of production.
Over the years, many designs were produced including the “Aegean”, “Delphis” and “Atlantis” to name but a few.
During the 1940/50’s what had been revolutionary in the 1930s tradition and it was time to simplify the patterns, which came about after a “Time and Motion” study which even consisted of counting the brush strokes. The ability to diversify and the strive for modernism kept the company flourishing.
Poole Pottery gift ware is currently created using “Living Glaze”. This involves the application of different glazes which react with one another to achieve unique results on each piece.
Sadly, now the original factory has been demolished and replaced by shops, but there remains a pottery shop on Poole Quay, selling Poole Pottery gift ware (first and seconds), lighting, tableware and studio ranges. There is also a studio on site, which is where a large amount of design work is done for new and future products. It is also where limited editions and one-off pieces are produced by a studio team. The main Poole Pottery factory is now in Burslem, Stoke on Trent where production continues following the closure of the Poole factory. Poole Pottery is now owned by the Denby Holdings Group.

Paul’s talk contained so much information on Poole Pottery supported by amazing slides, re-ignited interest in Poole Pottery and its history. He concluded by providing brief appraisals of some pieces brought along to the meeting by members.