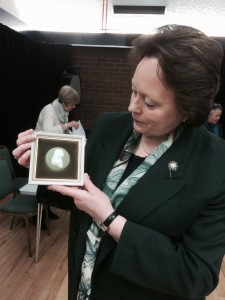 On Thursday 9 April 2015, Gaye Blake-Roberts, Curator & Director of the Wedgwood Museum, who lectures on Wedgwood worldwide, gave members a thrilling and exhaustive talk on “Josiah Wedgwood” as Potter, Pioneer and Philanthropist.
Gaye commenced with his heritage and continued into his working life – Josiah Wedgwood was born in Burslem, Staffordshire, was the last child of Thomas Wedgwood and Mary Wedgwood. By the age of nine, he was proving himself to be a skilled potter. He survived a childhood bout of smallpox to serve as an apprentice potter under his eldest brother Thomas Wedgwood IV. Smallpox left Josiah with a permanently weakened knee, which made him unable to work the foot pedal of a potter’s wheel. As a result, he concentrated from an early age on designing pottery and then making it.
In his early twenties, Wedgwood began working with the most renowned English pottery-maker of his day, Thomas Whieldon, who eventually became his business partner in 1754. He began experimenting with a wide variety of techniques, an experimentation that coincided with the burgeoning of the nearby industrial city of Manchester. Inspired, Wedgwood leased the Ivy Works in the town of Burslem. Over the course of the next decade, his experimentation (and a considerable injection of capital from his marriage to a richly-endowed distant cousin) transformed the sleepy artisan works into the first true pottery factory
Wedgwood was keenly interested in the scientific advances of his day and it was this interest that underpinned his adoption of its approach and methods to revolutionize the quality of his pottery. His unique glazes began to distinguish his wares from anything else on the market. He was perhaps the most famous potter of all time.
By 1763, he was receiving orders from the highest levels of the British nobility, including Queen Charlotte. Wedgwood convinced her to let him name the line of pottery she had purchased “Queen’s Ware”, and trumpeted the royal association in his paperwork and stationery. In 1773, Catherine the Great of Russia ordered the Green Frog Service from Wedgwood; it can still be seen in the Hermitage Museum.
As a leading industrialist, Wedgwood was a major backer of the Trent and Mersey Canal dug between the River Trent and River Mersey, during which time he became friends with Erasmus Darwin. Later that decade, his burgeoning business caused him to move from the smaller Ivy Works to the newly built Etruria Works, which would run for 180 years. The factory was so-named after the Etruria district of Italy, where black porcelain dating to Etruscan times was being excavated. Wedgwood found this porcelain inspiring, and his first major commercial success was its duplication with what he called “Black Basalt”. He combined experiments in his art and in the technique of mass production with an interest in improved roads, canals, schools and living conditions. At Etruria, he even built a village for his workers.
Not long after the new works opened, continuing trouble with his smallpox-afflicted knee made necessary the amputation of his right leg. In 1780, his long-time business partner Thomas Bentley died, and Wedgwood turned to Darwin for help in running the business. As a result of the close association that grew up between the Wedgwood and Darwin families, Josiah’s eldest daughter would later marry Erasmus’ son. One of the children of that marriage, Charles Darwin, would also marry a Wedgwood — Emma, Josiah’s granddaughter. This double-barreled inheritance of Wedgwood’s money gave Charles Darwin the leisure time to formulate his theory of evolution.
He belonged to the fourth generation of a family of potters whose traditional occupation continued through another five generations. Wedgwood’s company is still a famous name in pottery today (as part of Waterford Wedgwood; see Waterford Crystal), and “Wedgwood China” is sometimes used as a term for his Jasperware, the coloured stoneware with applied relief decoration (usually white), still common throughout the world.
Gaye’s lecture covered so much, the audience was left wanting to know more and probably wishing to hear the lecture again to fully appreciate the diversity of interests in Josiah Wedgwood’s life.