Our Monthly Meeting was more informal than usual with four of our members giving brief talks on their collections and what influenced them to start collecting.

Firstly this was a 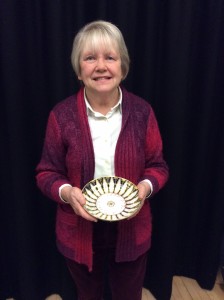 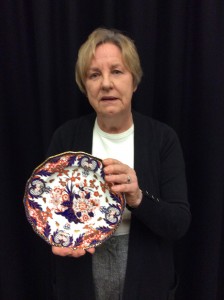 Following we were introduced to Crown Derby which later became Royal Crown Derby – this member started her collection all because a pair of vases matched her curtains!!  We were given a brief history of Crown Derby along with examples which have been collected over the many years including beautiful miniatures. 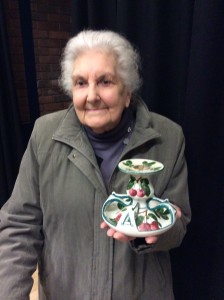 Next was a lovely piece of Wemyss Ware was displayed –This piece was given to a family member by the owner of the Wemyss Estate in Fife.   This member would like more information about it. 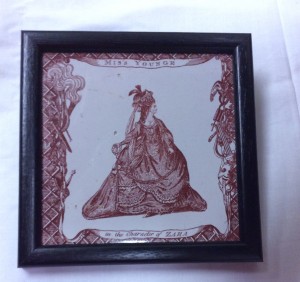 One of our members showed some extremely interesting transfer-printed tiles including this one which was printed, probably by Guy Green at Liverpool about 1771-1780, Green having taken over the business from John Sadler.

The tile shows Miss Elizabeth Younge in the character of Zara in William Congreve’s play ‘The Mourning Bride’. She first acted the part of Zara in London at the Drury Lane Theatre in April 1772. 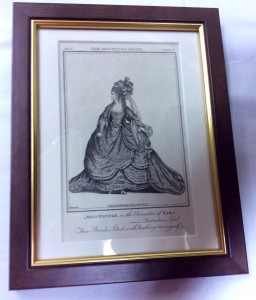 The print was published on 15th July 1776 in Bell’s British Theatre; the engraver was James Thornthwaite and was from a portrait by James Roberts.

Aileen covered how delft ware can be identified and the way in which it was or still is made.  It is Tin-glazed earthenware, which has been made in Europe since the 15th century. In Britain floor tiles and drug pots were made in the Aldgate area, London in the 16th century by immigrant potters from the Low Countries. In the early 17th century factories making dishes and other wares were set up in London close to the River Thames. Their products were initially much influenced by Chinese porcelain, as well as by Italian maiolica. Manufacture spread from London to centres such as Bristol, Liverpool and Dublin. Known as ‘gally ware’ in the 17th century, this type of pottery has come to be known as ‘delftware’ from the Dutch town of Delft which was renowned for its manufacture.

Aileen explained that The British Museum collection of delftware, which was established in the later part of the 19th century, is one of the finest in the world. It is especially notable for the number of pieces bearing dates and for those which document historical personages and events.