At the first 2014 meeting of Haywards Heath Ceramics Group seven members took the floor to talk about their ceramics interests.

First up was Mr Mike Turner who told us of his passion for British ceramic mugs, specifically collecting one from each pottery over the past 40 years. His first example was a 1795 mug from the Turner Potteries at Longton. 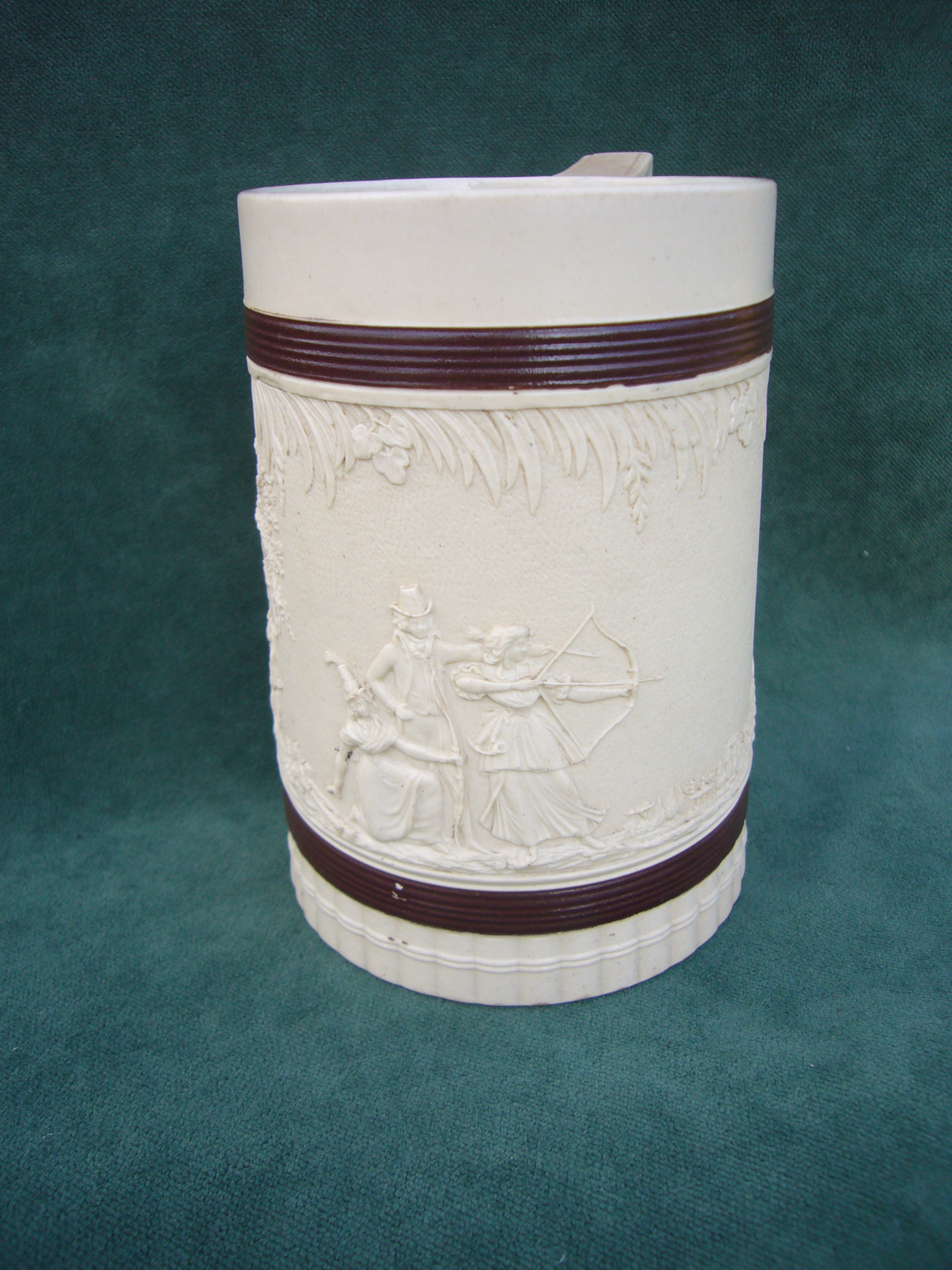 Then a mug made by Philip Christian in Liverpool, 1765-6, using soap rock clay from Cornwall. This was the period  when British potters  were attempting to copy china from the Dresden potteries. 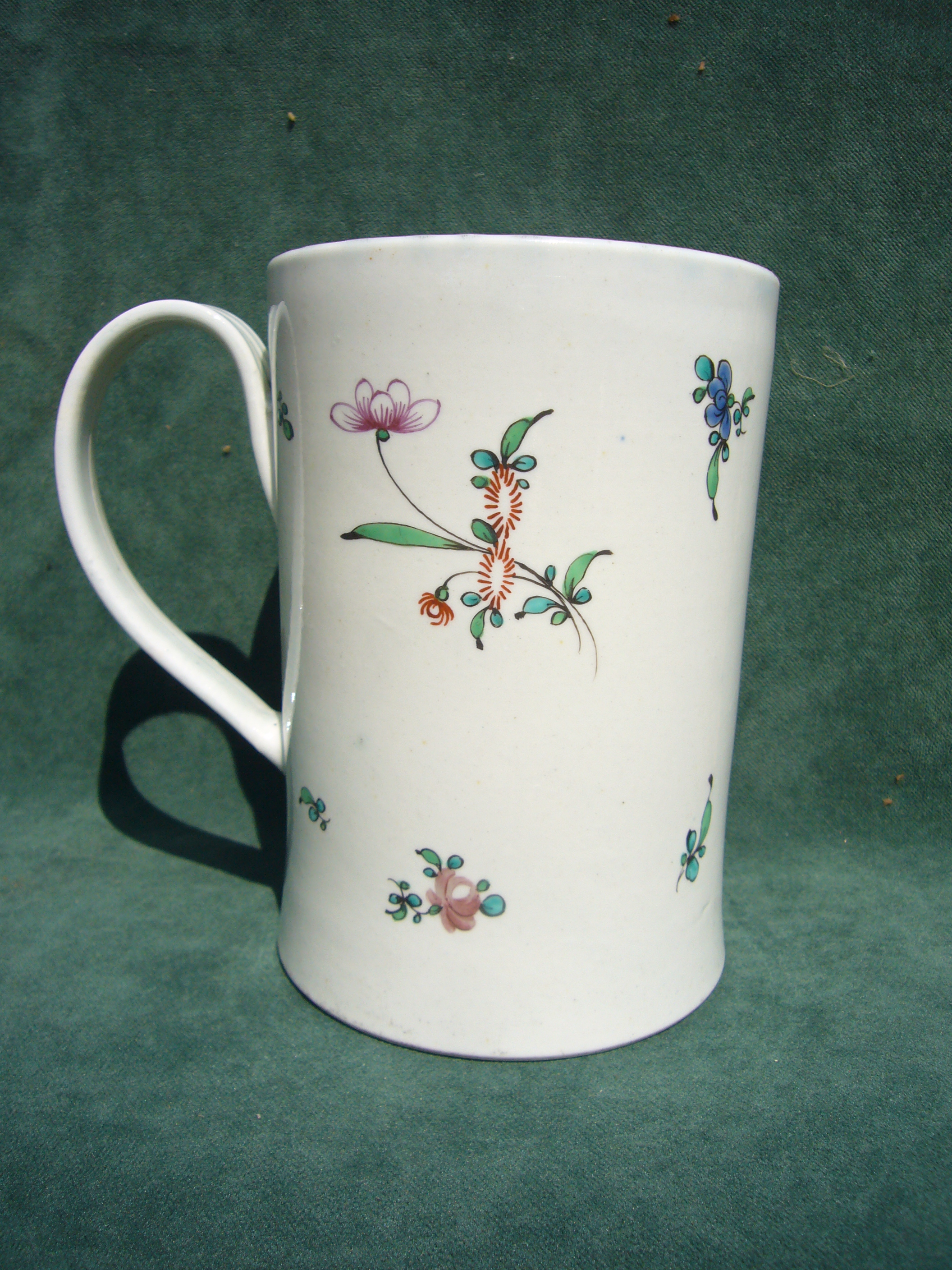 Next a bone china mug made by Hildich in 1822-30 with very coarse naive decoration. He told us this was very often done by young children employed in the potteries. 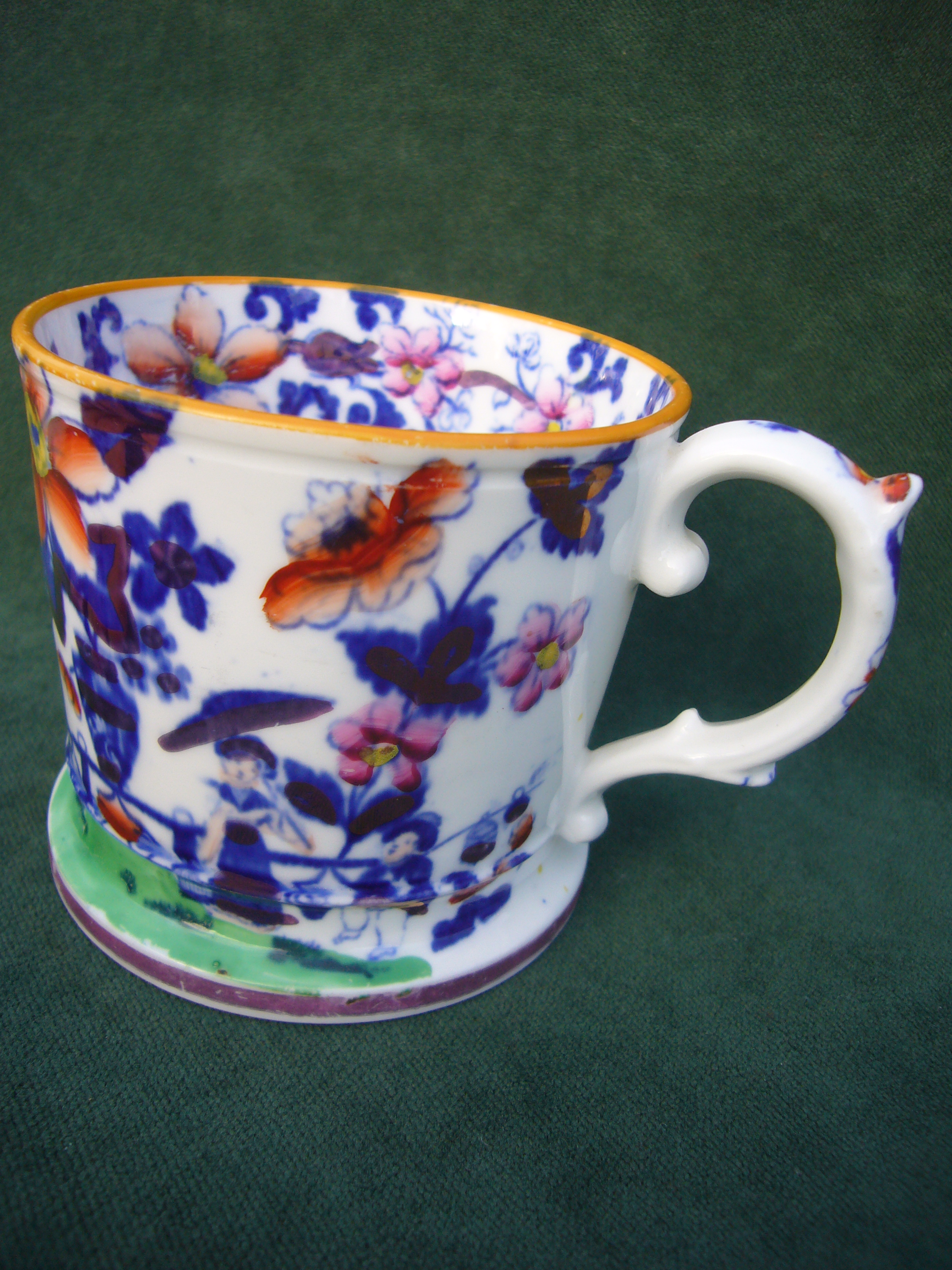 This was followed by a beautifully decorated mug made of a much finer paste at Derby in 1765-70. 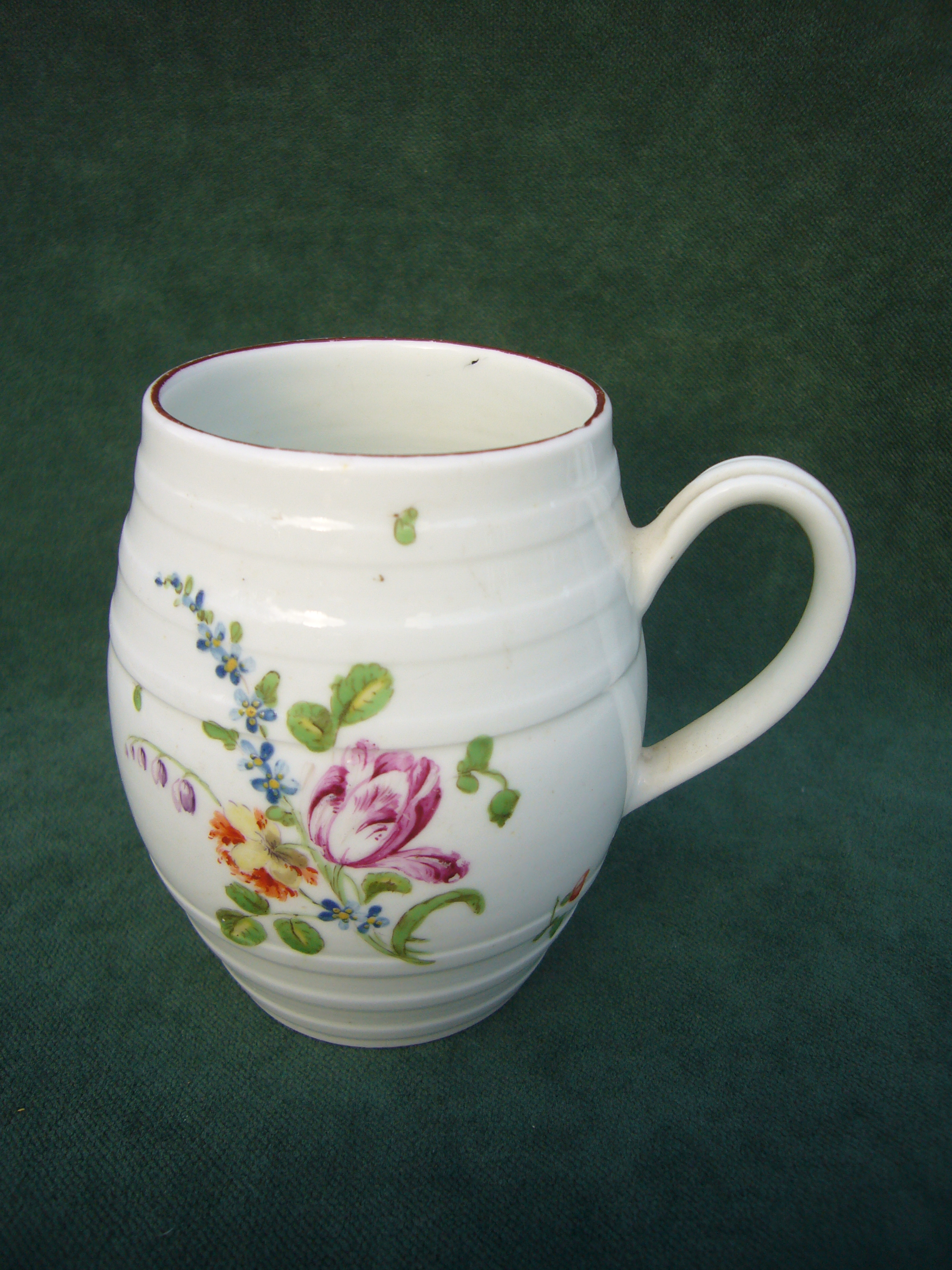 Another mug made by William Reid, 1770, in Liverpool had a very noticeable grey tone due to a blue underglaze. In 1800-1805 Turner was making mugs with his “patent” porcelain mixture which unfortunately proved to be very easy to break in the kiln. The example he showed us was beautifully decorated and gilded. 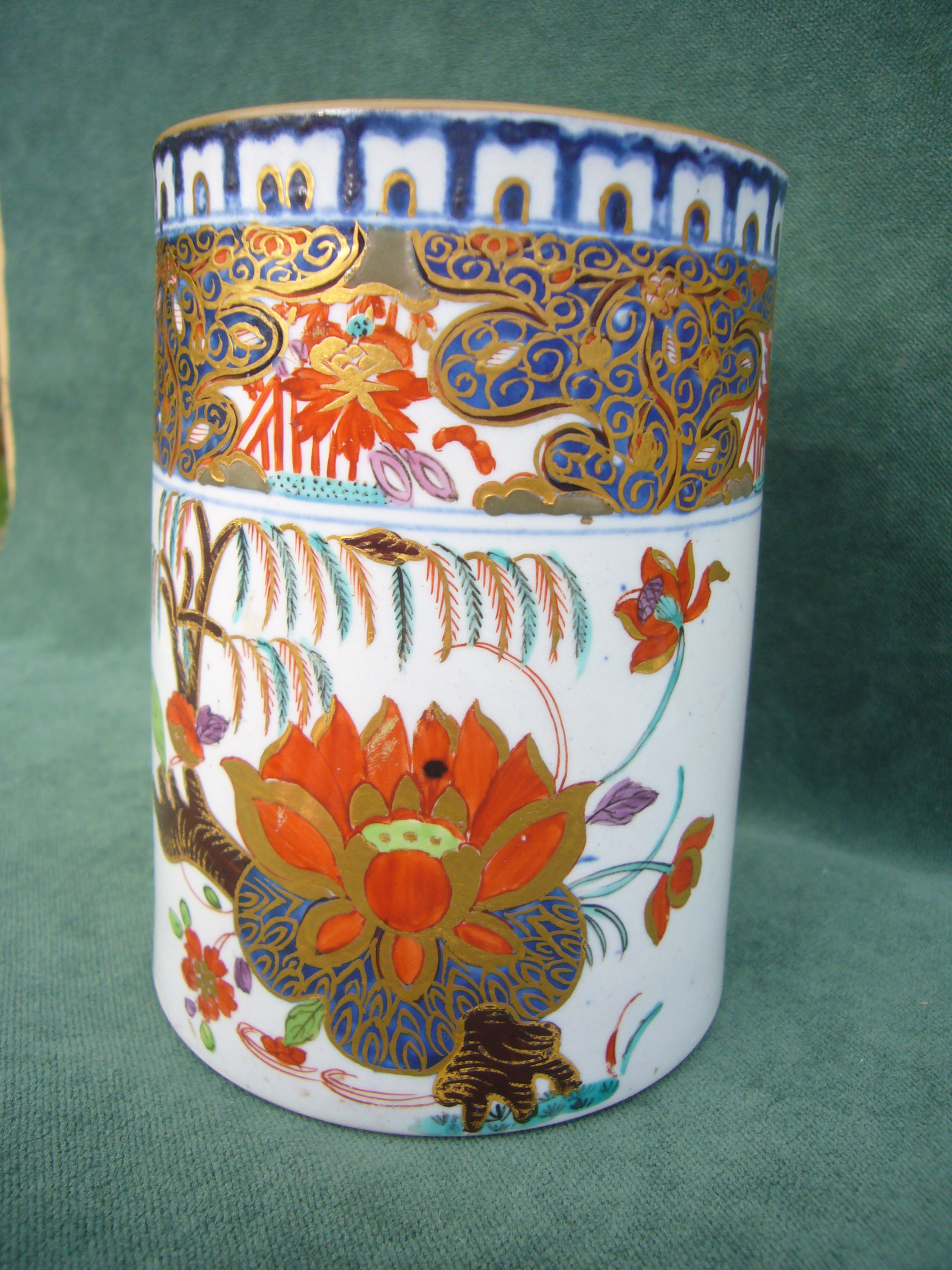 Finally we were shown an example from the excellent Swansea pottery – a very fine and beautifully hand painted mug. 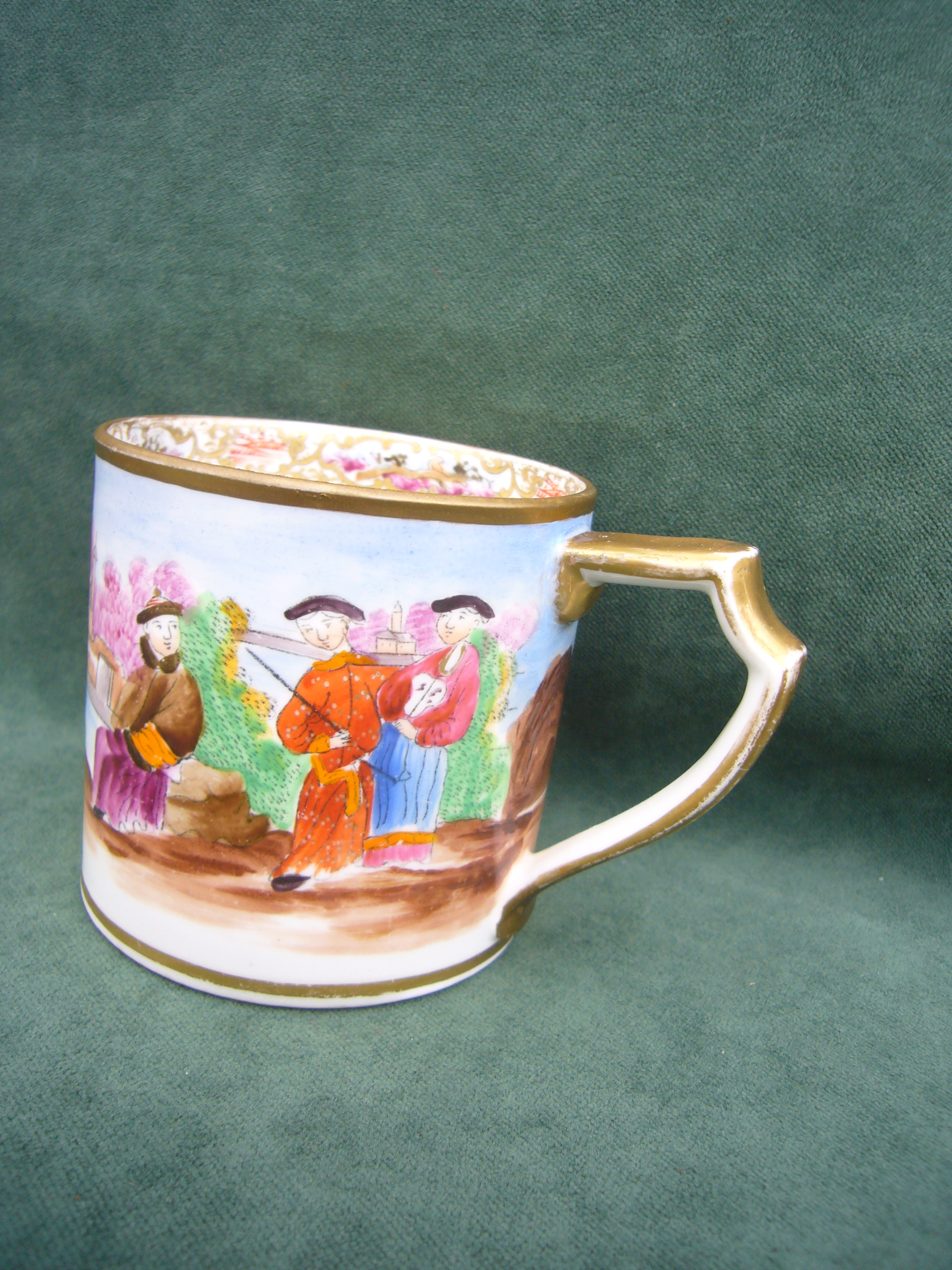 Mrs Pauline Hunt showed us her superb Iznik tile. Painted with one of Allah’s ninety-nine names, it has been dated as from the 19th century and has a very rough back – an indication it had been prised from a mosque wall. 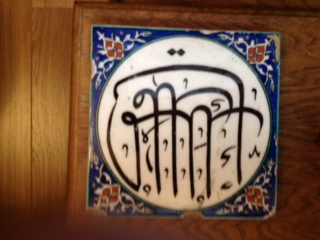 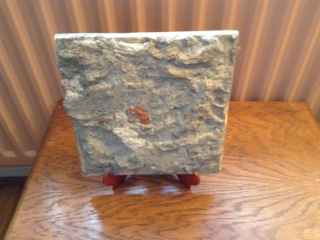 Mr Donald Church and Mr Michael Godfery showed us a beautiful pale green and flowered part tea set purchased in the Portobello market many years ago for £25. Now known to date from the early 19th century the maker was unknown. It has since been identified as Daniel Porcelain and decorated by Pollard who trained at Swansea Potteries. This richly decorated china in the Rococo style is now highly collectable and there is a Daniel Ceramics Circle. 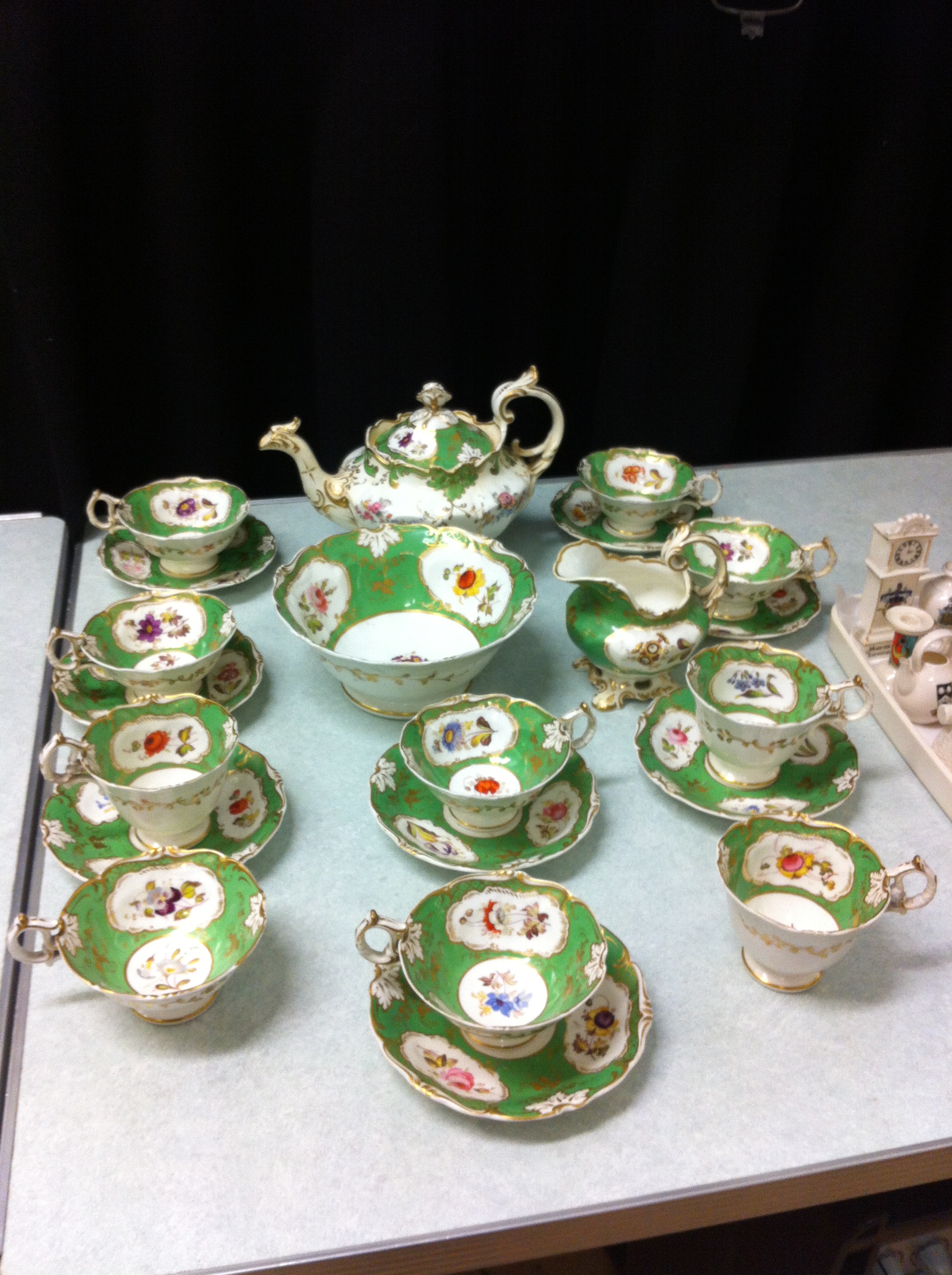 Mrs Vivienne Jones told us she bought her Goss collection many years ago “when shopping with two small children, because it was cheap and could be slipped inside her handbag!” 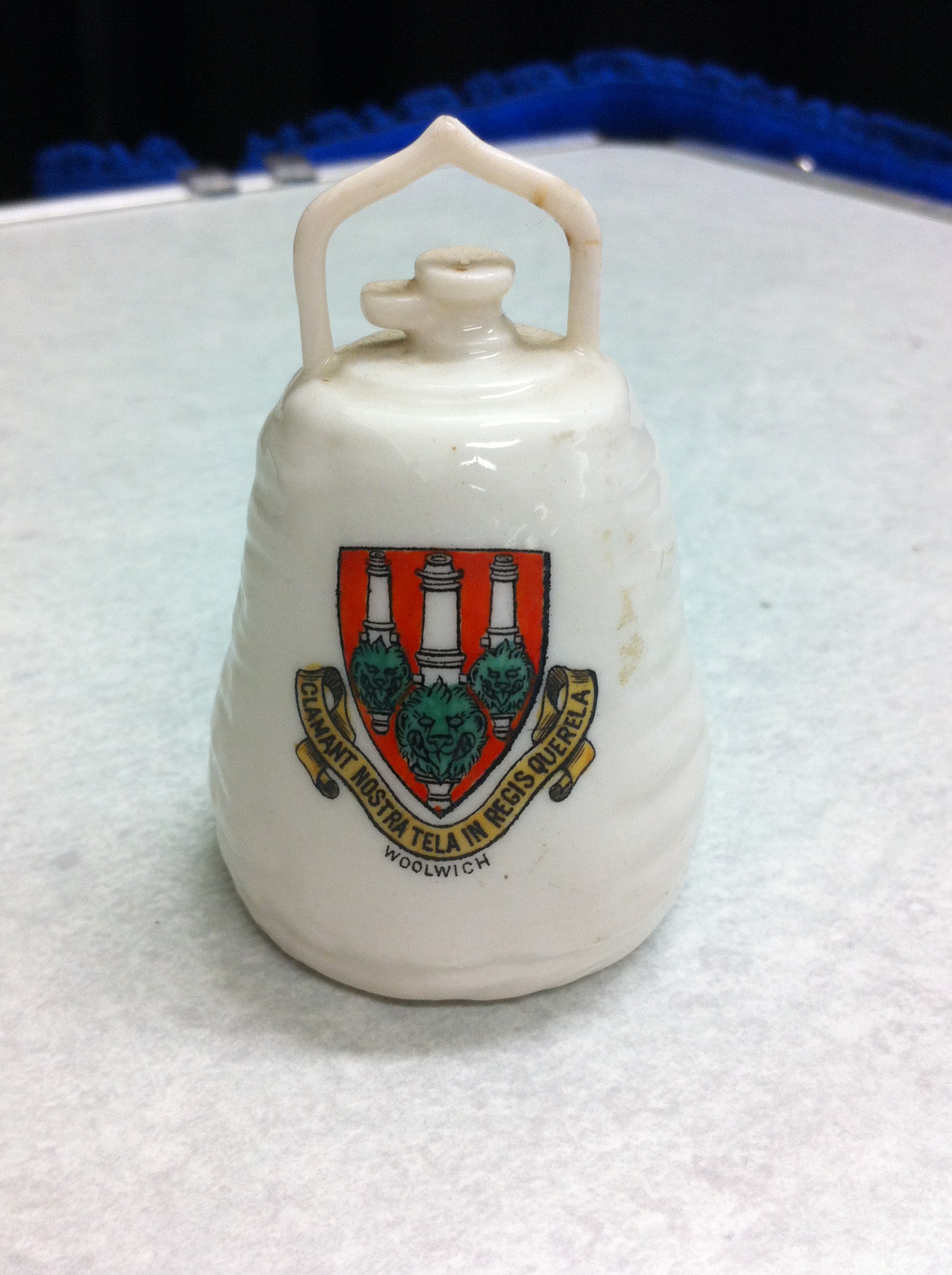 After the Industrial Revolution people had the time and money to go on holidays. The potter, Goss, realised this and in the 1880s produced his first seaside souvenirs; small china ornaments made cheaply and decorated with scenes from the towns in which they were sold. The pottery was sold in 1929 but revived after the second World War. At one time they were producing 2,500 different models with a choice of 10,000 decorations. There is a Goss Museum in Horndean, Hampshire.

Mr Robin Wilson is Chairman of the Potteries of Rye Society. Originating as brickworks, after several centuries of production using local clay. Only one pottery now survives. In 1840 William Mitchell owned the potteries. In 1869, with the advent of cheap rail travel encouraging tourists, his son Fred began making souvenirs for the trippers. Originally these wares were very simple shapes, but in time his wife, Caroline, developed the ranges. Around the end of the 19th century the decoration became more precise, with the Hop Ware design and the iconic Sussex Pig being famous. 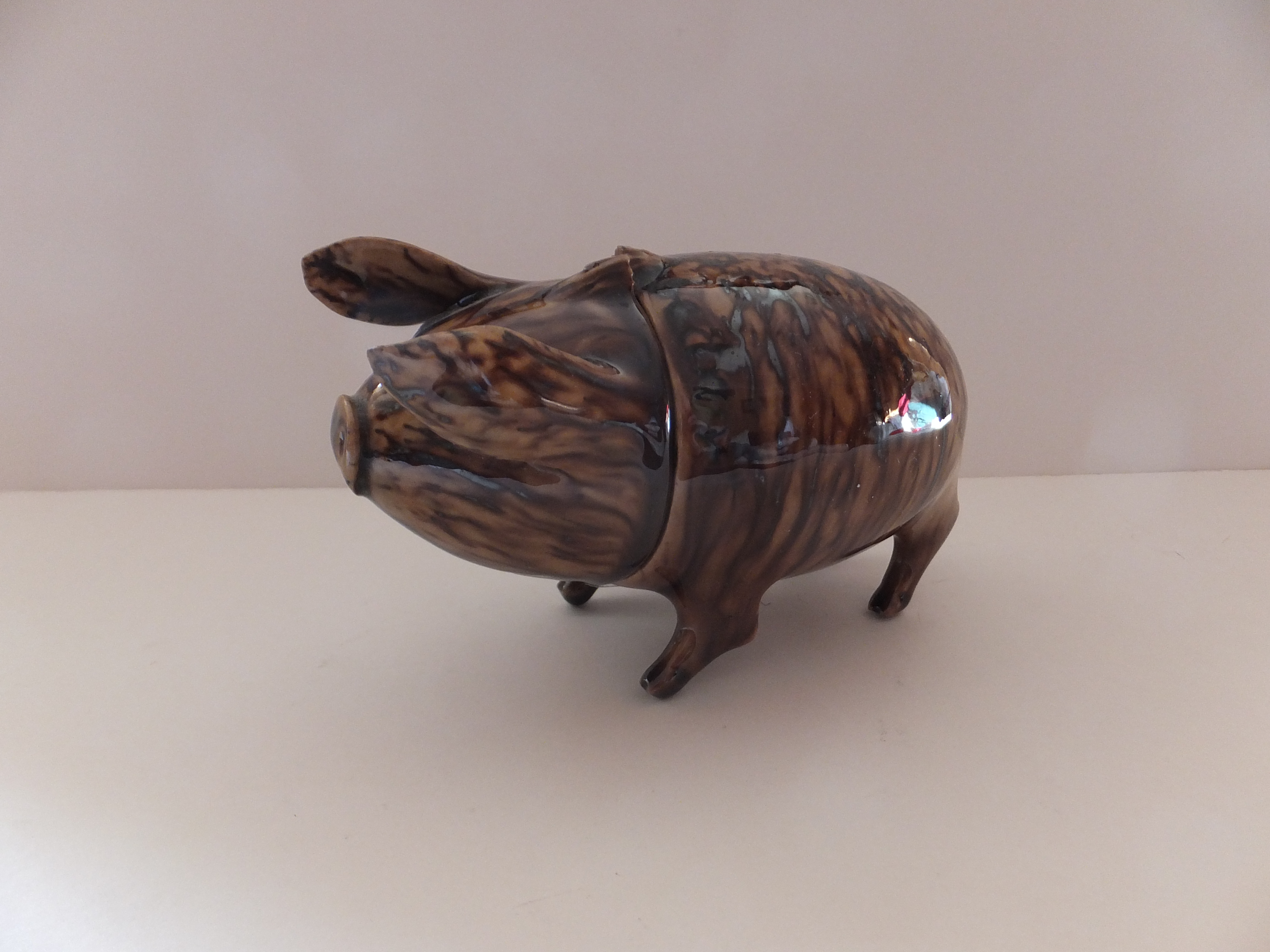 The pottery was sold to Mrs Ella Mills in the 1930s the style changed, but the business closed in the 1940s. After the Second World War  the Rye Pottery was purchased by the brothers Wally and Jack Cole. The Rye pottery is thriving and you can find more information by clicking here. 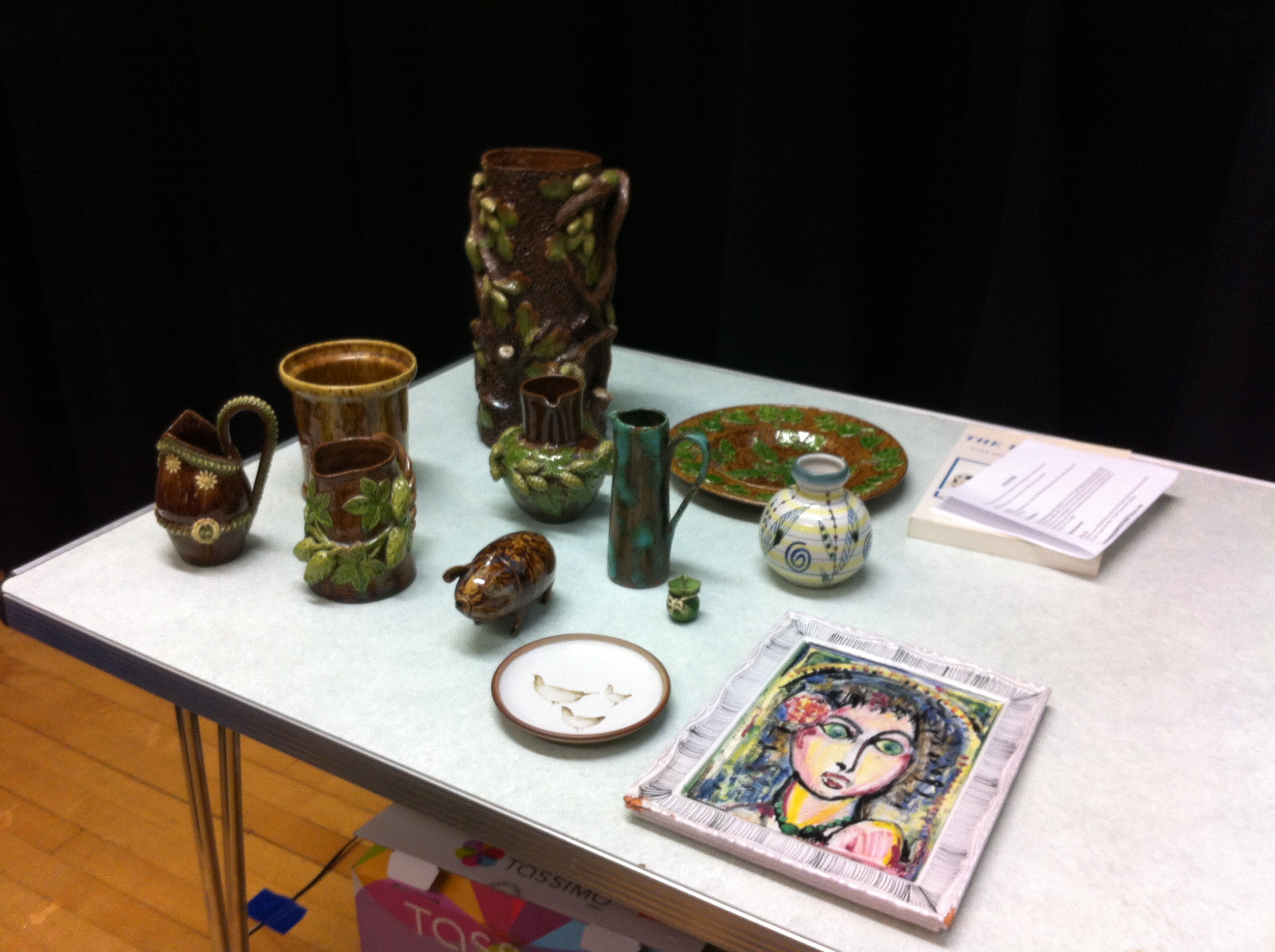 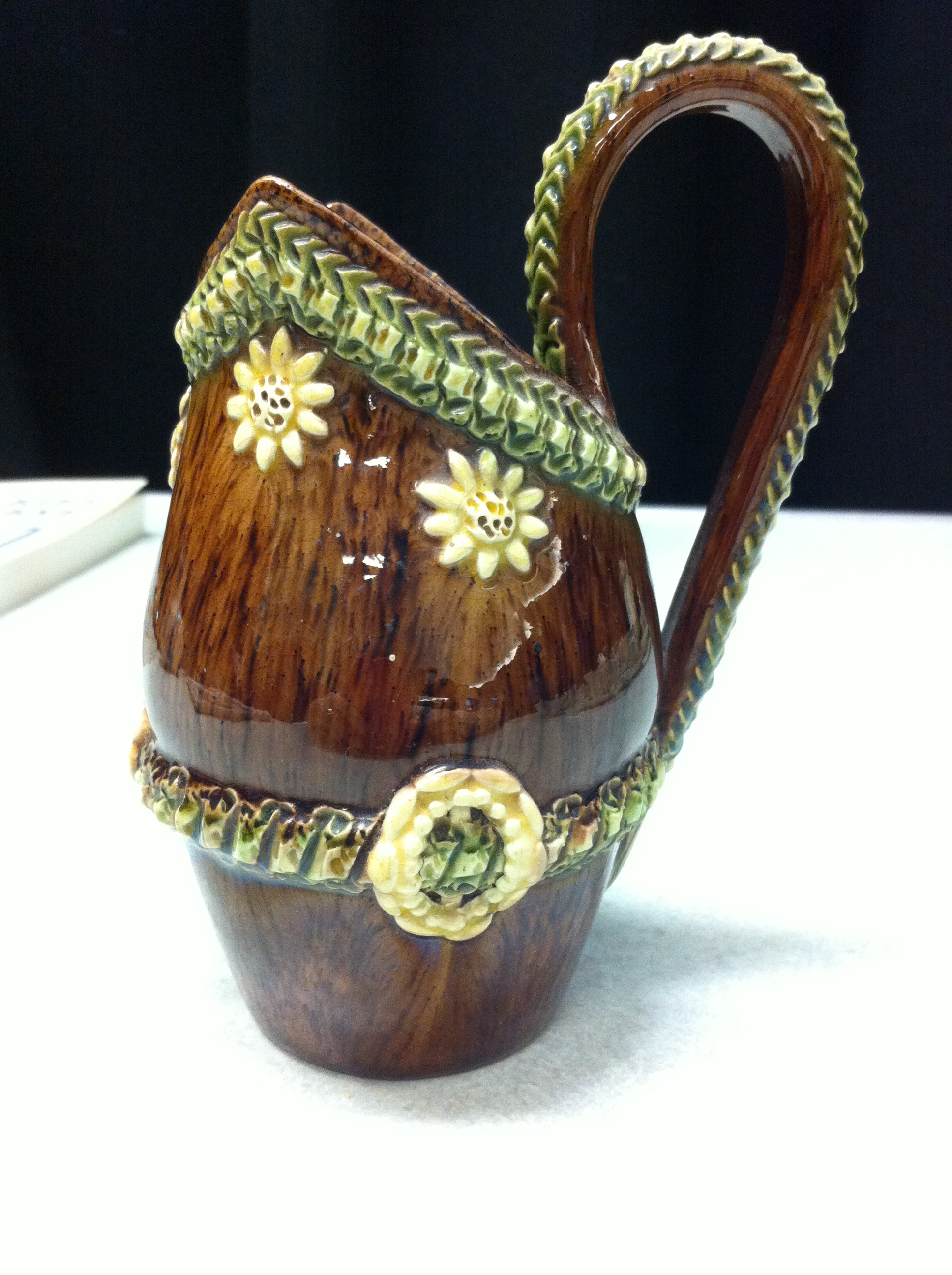 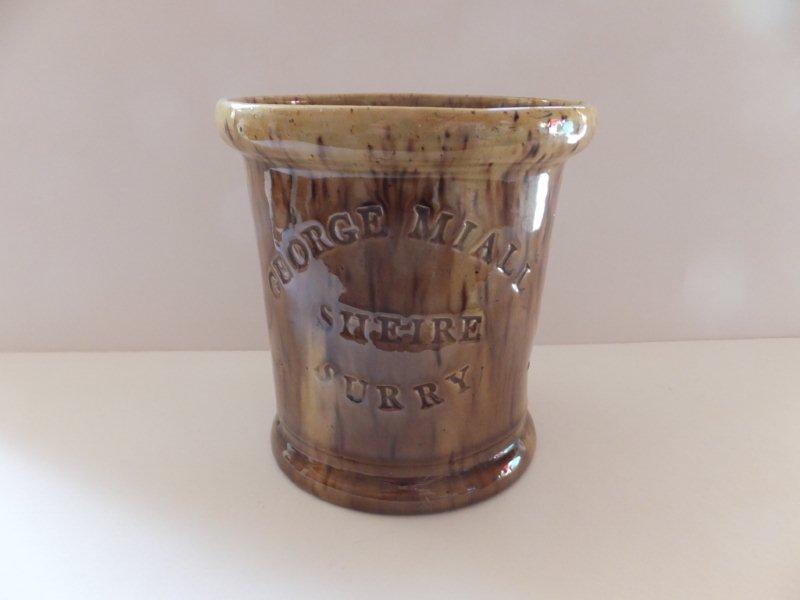 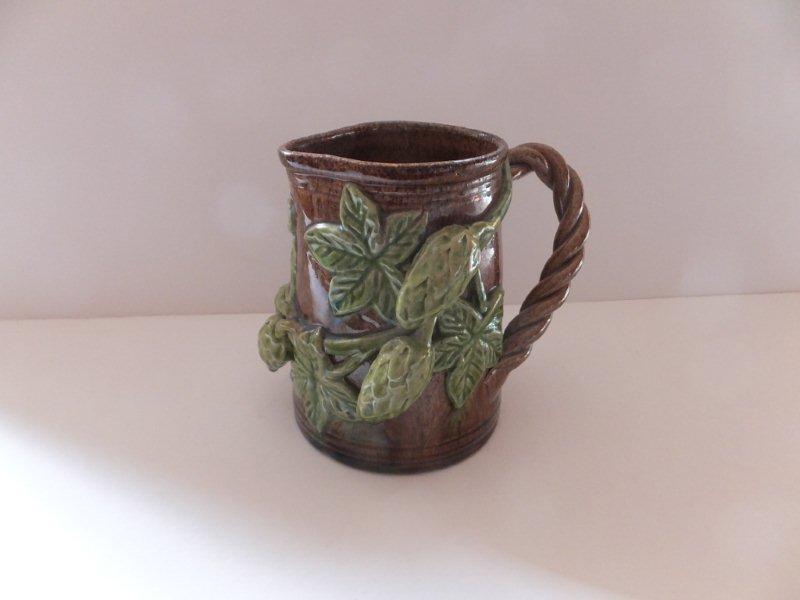 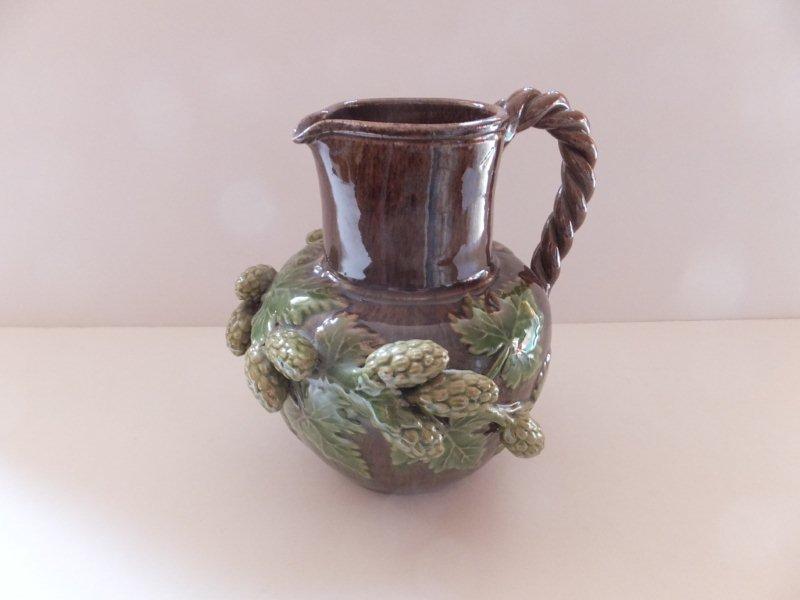 Mrs Therese Wilson is Head of Retail for St. Peter &  St. James Hospice which has 8 shops in Mid & East Sussex and operates a central sorting and distribution centre at the Hospice.  Any items of value are researched and priced accordingly before being sent to their charity shops. She showed us a wide variety of interesting donated items and explained that in order to maximise profits for the Hospice very high value items are often sold at auction. 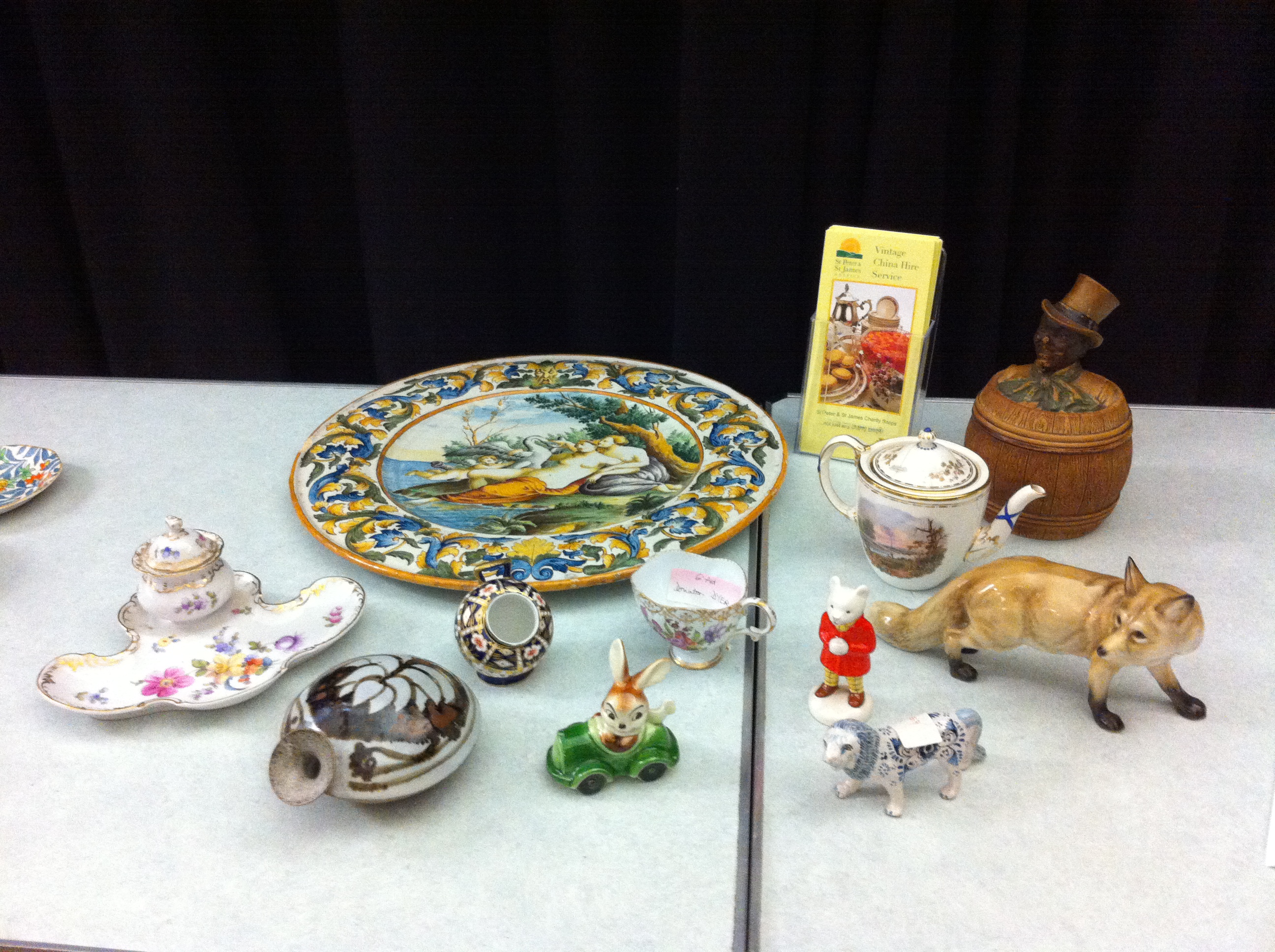 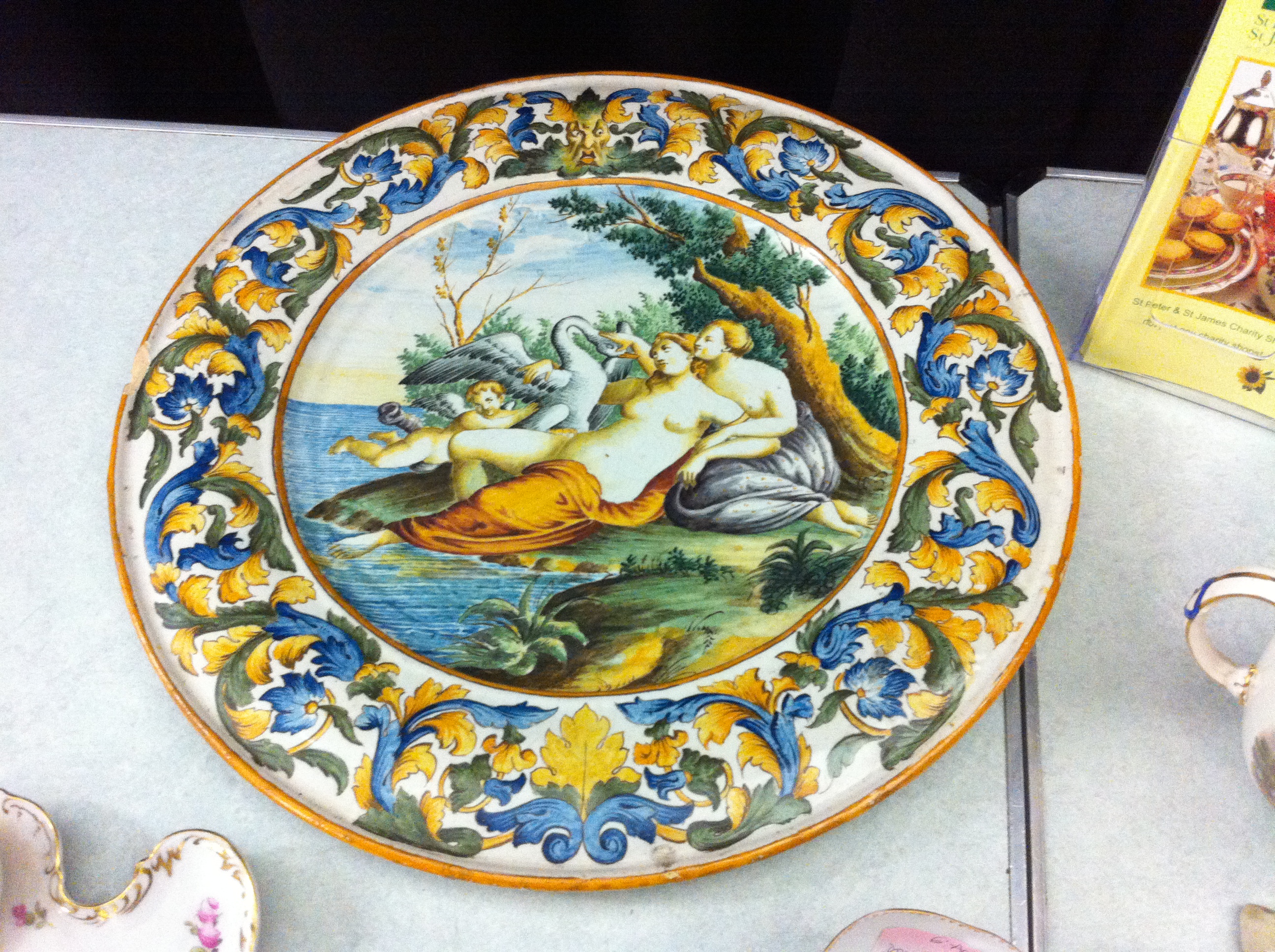 Finally Mrs Mary Manning talked about her passion for The Rainbow Pottery Lindfield. She told us it is very difficult to trace the history of this china but it was known to be sold from a shop in the High Street (behind Abbotts the Chemist) run by Mr J M Carter and two girls who cycled from Haywards Heath each day. Mrs Manning explained that at the moment  she does not think that pottery was made in Lindfield, but she knows that some of the pottery was made at the Potteries.

The Pottery is documented as having been exhibited at the Wembley Empire Exhibition 1924/25 amongst the major china manufacturers. Mrs Manning wonders how they managed to get a stand there as they were surrounded by major ceramics and glass manufacturers. If you have any information, please let us know. Designs range from simple floral patterns to beautifully lustre glazed items. 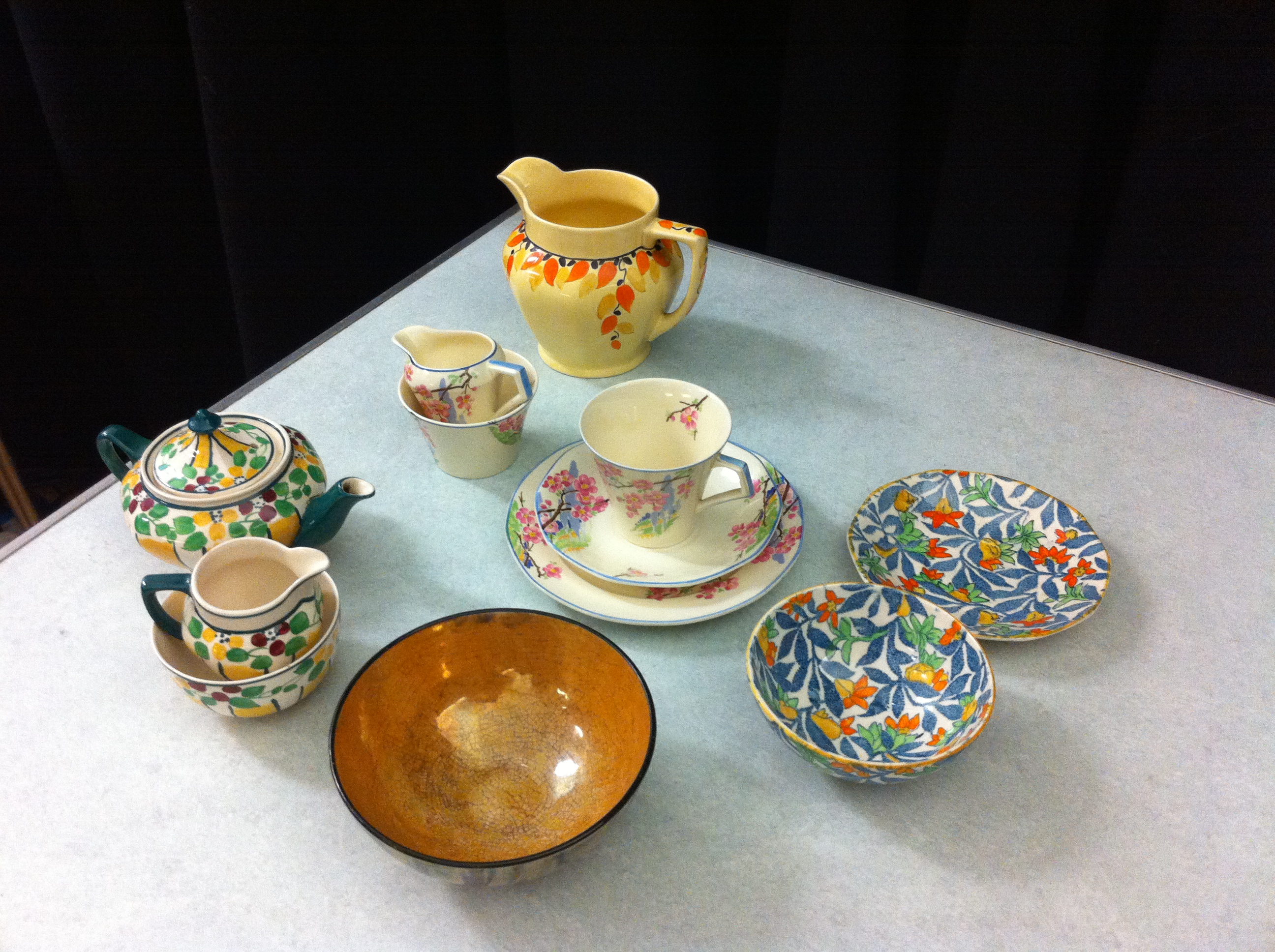 This was a very varied and interesting morning.