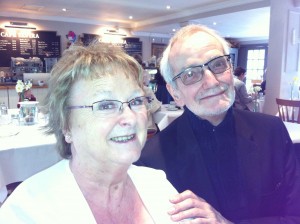 Lecturer Emeritus at Sotherby’s Institute of Art, London where he has lectured since 1987. Teaches regularly in London, New York and Paris. He grew up in Durham surrounded by coal mines and glass works which fostered his love of glass. He is curator of glass at the Broadfield House Glass Museum in Dudley and is joint owner of the Notley-Lerpiniere Glass Collection displayed there. His interests include the history of glass and ceramics, Russian art and manufacture, the history of interiors and social history in art.

At this lecture we not only learnt about the Romanov passion for highly gilded ceramics but also had a wonderful potted history of just what life was like at the Russian Court. When Germany invaded Russia they totally ransacked all the exquisite palaces and homes of the former Russian royal family. Fortunately, before they got there all the contents, the paintings, furniture, porcelain and books had been removed and secreted away in the salt mines where they remained until well after the war. Not only the valuables but also all the diaries, account books and written information about life at court including the diaries of the last Tsar and his family, were safely hidden and are now in the state archives. After the war the Communist government carefully rebuilt all the palaces and recovered the contents, which had survived virtually unscathed so that we today can marvel at them just as they were when the Romanovs lived there.

Tsar Paul 1st, the only son of Empress Catherine, was quite mad and his mother built the Pavlovsk Palace so that she would not have to see him on a daily basis. The architect was a Scotsman, Charles Cameron. Paul’s  favourite occupation was exercising his soldiers – not toy ones but a real regiment and he did this indoors if the weather was bad. He and his unobtrusive wife had no children. Her favourite occupation was shopping, ordering from illustrated “catalogues” from Paris.

There appeared to be absolutely no shortage of money. The palace was vast but very cold, heated only by porcelain stoves that were very smelly. There was no sanitation, numerous bowls of potpourri  were scattered about to hide the awful  smells. There was no designated dining room, it was decided at the last minute where meals were to be served. Guests consumed vast quantities of alcohol to keep warm and consequently had to be ferried about in three-wheeled basket chairs.

All the porcelain was made in the specially built Imperial Porcelain factory  and was  highly decorated. Six or seven layers of pure gold might be used to gild the highly decorated pieces and it was not unusual to have up to 900 pieces in one service. Happily with that amount of gilding it did not need polishing. The porcelain was so well stored during the war, it was found, for example, that only three items were damaged from  the  900 piece Frog service. Catherine commissioned a special service  which was used just once a year, when the first spring vegetables were served on it.  These massive services were frequently transported from one palace to another, wherever the family decided to have their next meal.

In addition to the Romanov Porcelain factory there was also an English one, owned by a man called Gardiner, of which little is know. The “Gardiner Service” comprised 4,000 pieces. There was also a glass factory, Grandole.

This was a highly entertaining lecture which left you wanting even more tales of Russian court life.

Recommended Reading:The Madonnas of Leningrad by Debra Dean.  A fictional account of the life of a guide in The Hermitage before and after the war. A very good read.

Take a virtual tour of the Hermitage on their website.