On Thursday April 11th 2013, we were treated to a very personal history. 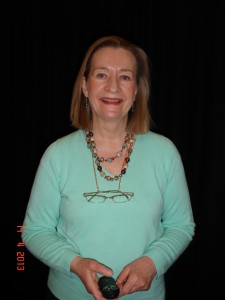 Valerie Doulton is the great, great, great granddaughter of the founder of the Royal Doulton company, John Doulton. Her family no longer had links with the Doulton company from when her grandfather took up the post of music master at Dulwich College and her father later also became a teacher. In 1979 the V&A mounted an exhibition of Royal Doulton, curated by Roy Strong and later she was asked by the V&A to give a talk and this prompted her to research her family background.

In 1815 John Doulton, with just £100, started the Lambeth Pottery with a partner, Mr Watts. In 1853 Watts left and the company became Doulton and Co. Their output was mainly for the brewing industry making heavy duty very robust containers for the process of making beer. John’s second son, Henry (born 1825) was sent to a very good school with plans to enter, among other things, the  priesthood. However strong-willed Henry had other plans and on his 15th birthday became a Doulton apprentice starting right at the bottom on the factory floor.  Henry has been described as “The greatest potter of the Victorian era and one of the greatest potters of all time”. Henry was not only good with clay but had a very inventive mind and developed several pieces of machinery including the first steam potters wheel, the first screw-topped stoppers for bottles and stoneware sinks.

In the first half of the 19th century Doulton were highly successful making glazed stoneware pipes, particularly when, after typhoid and cholera epidemics devastated London, it was decided mains drains needed to be installed. These are only now needing to be replaced.

By 1851 Doulton exhibited at the Great Exhibition in London including a detailed jug made by Frank Butler which you can see in the V&A. This was the start of the Art Pottery movement and, collaborating with the Lambeth School of Art, between 1866 and 1900 Henry employed over 400 craftsman making decorative pottery including a wide range of Toby jugs, decorative terracotta panels (to be seen in York and Truro cathedrals and architectural items such as fascia panels for London buildings (Harrods, Russell Hotel etc).

From 1862 Henry exhibited at international exhibitions, firstly drainage pipes and sinks but from 1867 (Paris) and 1893 (Chicago) he included decorative pottery, which became a great success.

The opening of the pottery in Burslem was not greeted with enthusiasm by the companies already established there who considered Henry an upstart. However he attracted many of the very gifted artists of the day. The company was granted royal status and became the Royal Doulton company we know today. In 1956 the Lambeth pottery was closed.

Henry,  is buried in West Norwood Cemetery in a modest mausoleum with a beautiful mosaic ceiling.